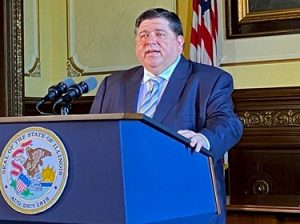 For the first time in more than two decades, the State of Illinois has received a credit rating upgrade. Gov. J.B. Pritzker says action will save the state and taxpayers ‘tens of millions’ in interest costs. (Capitol News Illinois photo by Jerry Nowicki)

Although the upgrade still leaves Illinois bonds rated just two notches above so-called “junk” status, Gov. J.B. Pritzker said it marked a turning point for the state, and he credited the General Assembly and members of his own administration for bringing greater fiscal discipline to the state’s budget.

“Make no mistake, despite all the challenges of the last year, after eight credit downgrades our state suffered under my predecessor, I say with full certainty Illinois’ fiscal condition is heading in the right direction for the first time in the 21st century,” Pritzker said during a Statehouse news conference.

In a statement, Moody’s said its decision was based in part on the recently passed budget, which increases pension contributions, repays last year’s emergency borrowing from the Federal Reserve and keeps the state’s bill backlog in check, with only “constrained use” of federal aid from the American Rescue Plan Act.

Moody’s also noted, however, that Illinois still faces significant long-term financial pressures, including its unfunded pension liabilities which the agency said “are routinely shortchanged under the state’s funding statute.”

“These liabilities could exert growing pressure as the impact of federal support dissipates, barring significant revenue increases or other fiscal changes,” Moody’s said.

“That is certainly something that we need to continue to work on,” Pritzker said. “As you know, from the beginning when I took office, we put forward a variety of methods for us to begin to deal with that. One of those has been a pension buyout program that has been successful. And so we’re going to continue to work on that to make sure that we expand that and offer buyouts to everybody who is in the retirement system that may want one.”

Pritzker said the rating upgrade would save Illinois taxpayers “tens of millions of dollars” in interest costs paid on its debt, some of which he said taxpayers are already seeing in the form of rates paid on some of the state’s most recent notes.

“I think it’s worth pointing out that the bond market trades typically ahead of credit rating agencies,” he said. “So our bonds actually were trading at a kind of higher level, as if the rating had already changed, because people were looking at what we were doing and, on their own, rating our bonds, the investors themselves.”

In addition to upgrading the state’s general obligation bonds, Moody’s also upgraded the state’s Build Illinois bonds – a program begun in 1985 to fund state and local infrastructure, economic development, education and environmental projects – as well as bonds issued by the Metropolitan Pier and Exposition Authority.

Those rating upgrades affect about $33 billion worth of bonds, according to Moody’s, including $27.7 billion in general obligation bonds, $3 billion in Metropolitan Pier and Exposition Authority bonds and $1.9 billion in Build Illinois bonds.