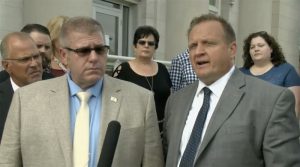 Rep. Darren Bailey (left), R-Xenia, and his attorney, Thomas DeVore, speak to reporters July 2 outside the Clay County Courthouse in Louisville after a judge there ruled that all of Gov. J.B. Pritzker’s executive orders since April 8 pertaining to the novel coronavirus pandemic are void because he exceeded his authority when he used his emergency powers for more than 30 days. The pair are now asking that the governor be held in contempt for continuing to issue executive orders. (blueroomstream.com)

Those orders allowed K-12 schools to hold in-person classes while following public health guidelines, ordered the Department of Corrections to take inmate transfers from county jails at the discretion of the director and reinstated almost 30 previously announced decrees.

The Xenia Republican also asked Clay County Circuit Court Judge Michael McHaney, who previously sided with the representative on July 2, to hold Pritzker in jail until he “purges himself by rescinding the above-mentioned executive orders,” according to a court document.

In his ruling, McHaney nullified all the governor’s executive orders related to the novel coronavirus pandemic made after April 8 — the date Pritzker’s first disaster proclamation expired. The judge also decided that the Illinois Department of Public Health, not the governor, has the “supreme authority” to close businesses and restrict residents’ activities in a public health crisis

By performing “willful actions,” Pritzker participated in “contemptuous acts which are calculated to embarrass, hinder, or obstruct this honorable court in its administration of justice, and are expressly calculated to derogate from its authority or dignity,” Bailey’s attorney Thomas DeVore wrote in a court document.

Pritzker’s office, Bailey and legal experts disagree on the scope of McHaney’s order — the representative and his lawyer maintain it applies statewide while others, including the governor, assert it affects only Clay County.

The last scheduled hearing in Bailey’s lawsuit — in which the judge was to hear arguments on one of two remaining issues — was canceled and has not been rescheduled. Before the attorney general’s office can ask a higher court to reconsider his order, McHaney needs to decide whether the COVID-19 pandemic met the definition of a disaster in Pritzker’s April 30 state of emergency.

He also needs to address a complaint DeVore added in late July alleging, in part, the governor should not be permitted to issue additional orders that affect Clay County.

DeVore is asking the judge to hold a hearing on whether Pritzker breached his ruling. If McHaney agrees to do so, an official with the attorney general’s office would need to appear in Clay County to defend the governor’s actions. Pritzker himself would likely not be required to travel from Chicago, Scott Szala, who teaches about the state constitution at the University of Illinois College of Law, said.

Bailey additionally wants the governor to reimburse him for attorney fees.

The attorney general’s office, in a document filed in early July, raised a question about whether McHaney had authority to rule in this case. The federal court that denied the state’s request to take over the lawsuit did not formally hand the case back to the Clay County circuit court until July 6, four days after McHaney handed down his order.

Devore alleged in cases originally based in Edgar, Clinton and Richland Counties that a disaster as defined by statute did not exist there, and the governor’s orders should not apply. Another filed by DeVore on behalf of his children argued high school sports should continue despite Pritzker’s restrictions.

Those four cases were consolidated with the one lawsuit the attorney had pending in Sangamon County.