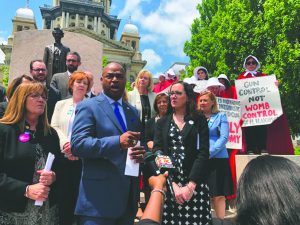 Democratic Rep. Emanuel Chris Welch, from Hillside, joins his colleagues in demanding the Reproductive Health Act get a committee hearing during a rally Wednesday outside the Capitol in Springfield. Welch chairs the Executive Committee, and said he would be a “proud” yes vote on the bill. (Photo courtesy of Planned Parenthood of Illinois)

SPRINGFIELD — Democratic lawmakers demanded their colleagues take action on a controversial, sweeping reproductive health care bill at a rally Wednesday, May 15 just outside the Statehouse.

Their call for the Reproductive Health Act to get a committee hearing comes amid recent action by other states to restrict access to abortion procedures.

The act, proposed in the House by Rep. Kelly Cassidy, from Chicago, and in the Senate by Sen. Melinda Bush, from Grayslake, would repeal Illinois’ abortion law and replace it with what backers and detractors agree would be the most liberal reproductive health care legislation in the country.

Democratic Gov. J.B. Pritzker has vowed to “make Illinois the most progressive state in the nation for access to reproductive health care,” seemingly indicating he would sign the bill if it arrived on his desk.

But after its introduction in February, both versions have sat in legislative limbo.

“Since that day, each week has brought a new horror, a new reason why this is so much more important,” Cassidy said. “I woke up this morning to yet more news of how close we are to losing our right to self-determination, our right to access true reproductive health care.”

She was referencing a law signed Wednesday by Alabama’s governor effectively banning abortion in the state. Others, including Georgia, Kentucky, Mississippi and Ohio have passed other restrictive laws this year.

Some of those states aim to get their laws before the U.S. Supreme Court in hopes of overturning Roe v. Wade, the landmark 1973 case that legalized abortion nationwide. 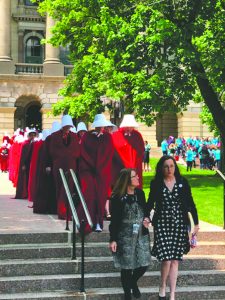 Sen. Melinda Bush (D-Grayslake) and Rep. Kelly Cassidy (D-Chicago) arrived at a rally outside the Statehouse on Wednesday trailed by about 60 women dressed as Handmaids, characters from Margaret Atwood’s dystopian novel. (Photo courtesy of Planned Parenthood of Illinois)

Cassidy and Bush were joined by about 20 legislators from both chambers of the General Assembly in urging their colleagues to codify the protections enshrined in the act, given the current political climate. Behind the group were about 60 women dressed as Handmaids, characters from Margaret Atwood’s dystopian novel.

“What we saw in Alabama yesterday must mobilize us. We can’t wait, we can’t rest on our laurels in Illinois,” Bush said. “There is a war against women’s rights and our ability to make decisions about our own bodies happening across this country. It’s not a time to hold bills and wonder if maybe we should move them. It’s a time to stand and say you picked the wrong state to mess with. You picked the wrong legislators to stand up against.”

Before action can be taken on the Reproductive Health Act, it must be moved to a substantive committee. For about two months, it was sequestered in the same subcommittee as all the other abortion-related bills proposed this session.

Democratic Rep. Emanuel Chris Welch, from Hillside, is the chair of the Executive Committee and called for the act to be posted there next week. He said he is “committed” to giving the bill a “full, fair hearing and being a proud yes vote.”

In an interview with Capitol News Illinois last week, Cassidy said women in Illinois are “in real danger” because of the General Assembly’s lack of action on this issue. At the rally Wednesday, she further emphasized the need for activity. 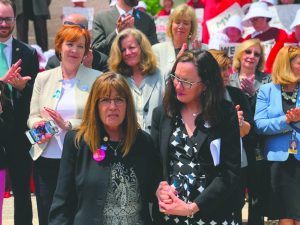 Sen. Melinda Bush (D-Grayslake) and Rep. Kelly Cassidy (D-Chicago) were emotional during a rally Wednesday at the Capitol in Springfield calling for their bill, the Reproductive Health Act, to get a hearing. They introduced the legislation in February, but it has been sitting in legislative limbo since then. (Photo courtesy of Planned Parenthood of Illinois)

Bush added the group’s call was “critical” and “urgent.”

Also at the Capitol Wednesday was a group opposing abortion.

The Illinois Citizens for Ethics Political Action Committee collected 15,774 signatures collected from churches in the state over eight weeks in opposition to the Reproductive Health Act and an effort to repeal a statute mandating minors consult their parents before getting an abortion.

“The mask has slipped. Advocates for these bills are not pro-woman — they are putting clinic profits before the safety of women and girls,” she said. “This is why so many women are getting involved in opposing this harmful legislation.”