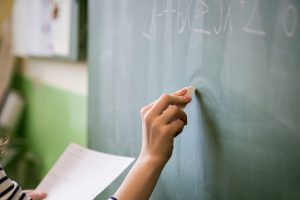 Gov. J.B. Pritzker proposed essentially flat funding for K-12 schools in the next fiscal year. Illinois State Board of Education however, is seeking a $406.5 million increase, or 4.6 percent, above current year spending.

SPRINGFIELD – State education officials made their case Thursday, April 1 for a funding increase above and beyond what Gov. J.B. Pritzker has recommended, arguing that schools need the additional money to overcome the effects the COVID-19 pandemic has had on student learning.

“While this recommendation does not represent the full need of education, and we clearly understand that, it’s made in recognition of the state’s current fiscal condition,” Illinois State Board of Education chairman Darren Reisberg told lawmakers. “We strongly believe this budget recommendation is necessary to provide the resources our schools, educators and students need to continue to recover equitably from the COVID-19 pandemic.”

ISBE officials made the case at a state Senate appropriations committee April 1 after appearing before a House committee last month.

Pritzker proposed essentially flat funding for K-12 schools in the next fiscal year, with only a $12.1 million increase for two districts — East St. Louis and North Chicago — that remain under state financial supervision.

ISBE, however, is seeking a $406.5 million increase, or 4.6 percent, above current year spending. That would bring their total state funding to just over $9.3 billion. That includes a $362.1 million increase in evidence-based funding — a formula adopted in 2017 that aims to bring all districts up to 90 percent of adequacy by 2027.

The state board also expects to receive a $2.4 billion increase in federal funding, but a slight decrease in funding from other state funds. Combined, that would bring its total funding next year to just under $16.1 billion, or 21.4 percent above this year’s level.

The evidence-based funding formula uses factors such as a district’s student headcount, poverty rate and class sizes to determine what an adequate level of funding would be. When it was first adopted, 168 school districts were funded at less than 60 percent of adequacy, but currently only 10 are at or below that level.

Still, Robin Steans, president of the education advocacy group Advance Illinois, said more than half of all students in Illinois attend districts that are less than 70 percent funded. 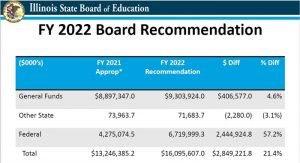 “And just so you understand that when we say over half of our students are in districts below 70 percent funded, that means that on average those districts have over $4,500 per-kid funding gap,” she said. “So as they’re trying to meet needs, they’re doing it with both hands tied behind their backs.”

Reisberg said the additional funding is especially needed this year because the pandemic has deepened racial and economic inequities that have existed since long before the outbreak.

“State investment, we believe, is needed to ensure that our students who were hardest hit by the pandemic have the increased access to learning time, support, staffing and opportunities that they need to recover,” he said.

In addition to the increase in base funding for K-12 schools, ISBE is also seeking a $50 million increase in funding for early childhood education, enough to open an additional 9,400 slots for children from birth to age 5.

“Research shows that providing a high-quality education for children before they turn 5 yields significant medium- and long-term benefits for students,” State Superintendent of Education Carmen Ayala said. “Children in early childhood education programs are less likely to repeat a grade, they’re less likely to be identified as having special needs. more prepared academically for later grades, more likely to graduate from high school and are higher earners in the workforce.”

ISBE’s presentation was substantially the same as the one it made to a House committee in March. The April 1 hearing was for informational purposes only and the Senate committee took no action on the request.

Lawmakers typically begin putting the budget together late in the legislative session, and the final budget bill is usually one of the last to pass the General Assembly in late May.