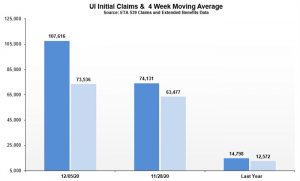 SPRINGFIELD – More than 107,000 Illinois workers filed first-time unemployment claims last week, a 45-percent increase over the week before as the COVID-19 pandemic continued to wreak havoc on the state and national economies.

That increase was part of a nationwide trend as the entire country has experienced record numbers of new cases and hospitalizations due to the pandemic. But the increase in new jobless claims in Illinois was sharper than it was nationally.

According to the U.S. Department of Labor, new unemployment claims nationwide rose 32 percent over the prior week, to 947,504.

The number of people receiving continuing unemployment benefits has also risen. In Illinois, that number went up 14.5 percent, to 340,919, while nationally it rose 10 percent, to just under 5.8 million.

During his daily COVID-19 briefing on Thursday, Dec. 9, Gov. J.B. Pritzker declined to say whether the state’s increase was due in any part to the stricter Tier 3 mitigations that went into effect Nov. 20. Those include closing bars and restaurants to indoor service, closing casinos, video gaming facilities, theaters and indoor recreation centers, and limiting the size of both indoor and outdoor public gatherings.

“Remember that there are a lot of things that affect employment that occurred long before just a couple of weeks ago,” he said. “We’ve seen layoffs at major companies that were in the works for some number of months now, so I can’t answer that question.”

The Labor Department also reported that 26,450 people filed for Pandemic Unemployment Assistance, a federally-funded program for a class of workers who don’t normally qualify for traditional unemployment. But state officials have noted that the PUA program has been fraught with fraud since its inception earlier this year and it is unclear how many of those claims are legitimate.

Meanwhile, there was only a 1 percent increase in new claims filed under the Pandemic Emergency Unemployment Compensation program, another federally-funded program that provides 13 weeks of additional jobless benefits for people who have exhausted their state benefits.