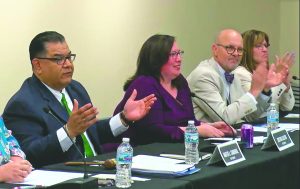 SPRINGFIELD — Stakeholders from northern Illinois added to the state’s list of capital funding requests Monday as lawmakers from both sides of the aisle acknowledged more revenue would be necessary to get the state’s infrastructure back in working order.

The meeting at the Gail Borden Public Library in Elgin was the fifth of eight in a statewide tour of the Illinois Senate subcommittee on capital.  Lawmakers heard from elected officials, higher education representatives, local contractors and human service providers.

All of them joined the chorus of state-funded entities lamenting the negative effects of a two-year budget impasse and the fact that the state has gone nearly 10 years without a capital infrastructure bill.

Their requests included funding for community college buildings, wastewater and sewage projects, roads, bridges, infrastructure at domestic violence shelters and other human service providers which were hit hard by the impasse, and more.

“Let’s talk about both issues (revenue and capital needs),” DeWitte said. “The wish list is getting longer, but [the list of] ideas about how we fund all of this seems to be getting shorter meeting after meeting.”

“We’ve got a lot of tough votes to take,” Sandoval said. “Fair tax. Bag tax. Recreational marijuana tax. Gaming tax. Capital bill. We have to get through all the previous aforementioned revenue streams before we get to a capital bill.”

The local stakeholders were generally supportive of new revenue streams, with some of the most popular topics being an installation of tolling on Interstate 80 and an increase to the state gas tax, which currently is 19 cents per gallon, although a sales tax is also applied to motor fuel in Illinois.

Their other suggestions included taxes on services, taxes on warehouses which are a hub for heavy delivery trucks which damage roads, an increase to recordation fees on real estate transactions, taxes on lodging services such as Airbnb, taxes on delivery services such as FedEx, additional taxes on alcohol and cigarettes, and more.

The local elected officials also requested greater funding of the Local Government Distributive Fund, which has been cut in recent years. Elgin Mayor Dave Kaptain said the increase could be mandated for infrastructure use, and local governments could then decide how the dollars would be spent.

John Schmitt, Algonquin village president, said more revenue streams are needed because “we can’t just keep going back to property taxes” and “we’ve got to have a constant annual source of revenue.”

Sandoval said he has taken criticism for his Senate Bill 103, which would double the gas tax to 38 cents while increasing all vehicle registration fees to $148 from $98 for regular vehicles and $17.50 for electric vehicles.

License fees would also increase in the bill, which would raise approximately $2 billion in revenue for road and bridge projects.

“And that’s just horizontal projects,” Sandoval said, adding that more revenue streams would be needed to fund vertical projects such as college buildings and police and fire stations.

Sandoval called on his Republican colleagues to support added revenues to make a capital bill possible, noting that only one person – Chicago Democrat Ram Villivalam – has signed on as a cosponsor to his bill.

DeWitte, a freshman Republican, said he was ready to move beyond the former Republican Gov. Bruce Rauner years, and investment from the state is needed to bring economic development.

“As Chairman Sandoval said, it’s going to take everyone doing their share on the lift. I’m almost ready to do that,” he said. “I think the longer we wait, the more expensive it becomes. It’s a cliché, but this has been put off way too long in this state. Without solid infrastructure, there’s no reason for anyone to come here and invest. That’s the key to economic development in this state, which will help lift us out of all of the abysses that we are dealing with on numerous fronts within the state of Illinois.”

Another bill, House Bill 3823 carried by Rep. Andre Thapedi (D-Chicago), would increase the gas tax even further while phasing out the sales tax on motor fuel among other wide-ranging changes. While it is backed by the Illinois Chamber of Commerce, it has no co-sponsors and remains in the House Rules Committee.