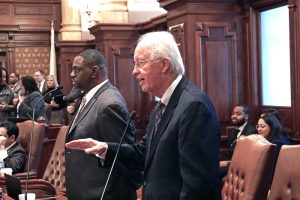 SPRINGFIELD – State Sen. Terry Link, who was charged last month in federal court with tax evasion, has resigned his seat.

Link, a Democrat from Indian Creek, had been a key player in passing gaming legislation in Illinois, including a massive 2019 expansion bill that provided for sports wagering, added land-based casinos and a Chicago casino.

Link had served in the Senate representing the 30th District since 1997. He also served as chair of the Lake County Democratic Party, resigning from that post last month amid backlash from some within the party.

The timing of Link’s resignation from the Senate means there is not enough time to hold a special election to fill his seat. The deadline for that was Friday, Sept. 11, according to a spokesman for the Illinois State Board of Elections. Link submitted his resignation to the secretary of the Senate on Sept. 10 and his resignation did not take effect until the morning of Saturday, Sept. 12.

That means a committee of Democratic Party officials from the 30th District will name a successor who will serve out the remainder of Link’s current term, which expires in January 2023.

“I look forward to welcoming and working with a new senator from Lake County. We’ve got a lot of work to do for the people of Illinois,” Senate President Don Harmon, D-Oak Park, said in a statement Friday.

Link was charged in a criminal information document on Aug. 13 with one count of tax evasion for allegedly understating his income on his 2016 federal tax return.

It has also been widely reported that Link was the unnamed state senator, identified in court documents only as “Confidential Informant 1,” who wore a wire for federal authorities who were investigating former state Rep. Luis Arroyo. Link has strongly denied that he was the confidential informant.

Arroyo is charged with bribery for allegedly offering to pay the senator cash in exchange for his support of gaming legislation that would have benefitted one of Arroyo’s lobbying clients.

Link is now the third state senator in Illinois to be charged with a federal crime in the past 13 months.

Sen. Tom Cullerton, D-Villa Park, was charged in August 2019 with embezzlement for allegedly being on a ghost payroll for a Chicago-area labor union while serving as chairman of the Senate Labor Committee. He has pleaded not guilty and remains in the Senate.

And in January, former Sen. Martin Sandoval, D-Chicago, was formally charged with bribery for allegedly accepting money from officials within a red-light camera company while he was serving as chairman of the Senate Transportation Committee. He has pleaded guilty, resigned his seat and is reportedly cooperating with federal authorities in an ongoing investigation.