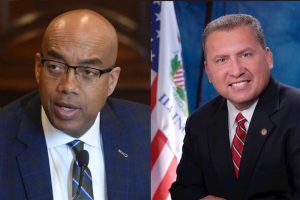 SPRINGFIELD – The Illinois Supreme Court on Thursday, Sept. 22 rejected a lawsuit filed by two former state legislators who sued for back pay they believed they were due for raises that they voted against while in office.

Former Sen. Michael Noland, D-Elgin, and former Sen. James Clayborne, D-Belleville, argued that the pay reduction measures they voted for violated the legislative salary clause of the Illinois Constitution, which says, “changes in the salary of a member shall not take effect during the term for which he has been elected.”

But in a 6-0 decision, the court declined to rule on the constitutionality aspect, saying the former lawmakers undercut their own case by voting in favor of the measures, touting them to the public and waiting too long to file their claims.

“We conclude that under the facts here, where plaintiffs, former legislators, agreed to, acquiesced in, and voted for the Salary Reduction Laws, plaintiffs cannot now be allowed to challenge the reductions in their salaries during their previous terms in office,” Justice P. Scott Neville wrote for the court.

Chief Justice Anne Burke and Justices Mary Jane Theis, Michael Burke, David Overstreet and Robert Carter concurred. Justice Lisa Holder White, who joined the court in July after oral arguments in the case had already concluded, did not take part in the decision.

Illinois is currently governed by the Compensation Review Act. In 1990, a Compensation Review Board that has since been abolished recommended that legislative salaries be subject to annual cost of living adjustments, or COLAs. The General Assembly approved that recommendation and it remained in effect when the board was abolished.

In 2009, in the wake of a severe recession, lawmakers passed a bill canceling those COLAs for the upcoming fiscal year, and they repeated that policy each year until 2019.

Clayborne served in the General Assembly for 24 years, from 1995 to 2019. Noland served for 10 years, from 2007 to 2017. Noland first filed the suit in Cook County shortly after he left office and Clayborne joined two years later after he had announced he would not run for another term.

The lawsuit sought what’s known as a “writ of mandamus” — an order for a public official to perform a legal duty — against Illinois Comptroller Susana Mendoza.

In July 2019, Cook County Judge Franklin Valderrama ruled in their favor, saying the salary freezes were unconstitutional, and a subsequent judge, Allen P. Walker, issued an order in April 2021 for Mendoza to make the payments. But Mendoza appealed directly to the Supreme Court.

During oral arguments, Attorney General Kwame Raoul’s office, representing Mendoza, did not challenge the finding that the legislative acts were unconstitutional, but argued that the former senators had effectively waived their right to any relief by voting in favor of the pay reduction bills.

It also argued that the former lawmakers waited an unreasonable length of time before filing their claims and that their claims should be barred by the statute of limitations, which is generally five years.

In its Sept. 22 ruling, the Supreme Court agreed with those arguments and did not rule on the constitutionality argument.

“I’m so grateful the Supreme Court said ‘No’ to these two former legislators who voted to forego their raises, then issued news releases praising their self-sacrifice in declining those raises as they asked their constituents to re-elect them,” Mendoza said in a statement. “Years after they left the legislature they shamelessly sued me — and by extension, you, the taxpayers – saying they had no constitutional right to decline those raises and wanted them back.”