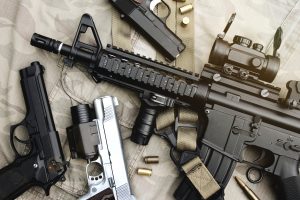 The Illinois Supreme Court upheld a Village of Deerfield assault weapons ban in a ruling handed down on Nov. 18.

SPRINGFIELD – In its latest round of opinions Thursday, Nov. 18, the Illinois Supreme Court upheld a Village of Deerfield assault weapons ban and restored a Putnam County man’s right to a Firearm Owners Identification card over the objections of the Illinois State Police.

The decision in the Deerfield case was split 3-3, with Justice Michael Burke abstaining from the vote, meaning an appellate court’s ruling that allowed the ban was upheld as the final decision. Burke was part of the 2nd District Court of Appeals which heard the case previously.

The case centered around a narrow window written into a state’s amendment to the FOID Act in 2013, which allowed home rule municipalities to adopt stricter gun laws if they passed an ordinance within 10 days of the law’s effective date, July 9, 2013.

Deerfield did so within the law’s parameters, but the court was asked to decide whether the village’s 2018 amendment to its ordinance that banned civilian use of assault weapons and large capacity magazines was an extension of the 2013 action or a new law altogether.

In 2019, a Lake County judge ruled in favor of gun rights groups and Deerfield resident Daniel Easterday, who sued to block the ordinance and claimed it was in violation of the state’s FOID and concealed carry laws.

But the 2nd District Appellate Court later overturned that decision, ruling that the 2013 FOID amendment created “a hybrid balance of regulatory power between the state and local governments,” and “Deerfield preserved its power to regulate assault weapons concurrently with the state when it enacted its 2013 ordinance.”

While the Supreme Court agreed to hear the appeal, the 3-3 deadlock means the appellate court decision remains in effect.

A 2020 ruling by the Illinois Supreme Court which declared gun rights to be civil rights was key to a Nov. 18 decision which restored Putnam County man Thomas Brown’s right to a FOID card.

Brown was a FOID cardholder for several years, most recently applying for and being granted renewal in 2013.

But in 2016, he tried to purchase a gun at a federal firearm licensee, leading the Illinois State Police to conduct a background check. That unearthed a 2001 conviction in California on a “misdemeanor offense of inflicting corporal injury on a spouse” that he did not disclose on his FOID application, according to a court filing.