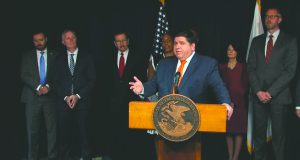 Gov. J.B. Pritzker and members of the Pension Consolidation Feasibility Task Force release a report recommending that 649 separate suburban and downstate police and firefighter pension funds be merged into two. The task force’s report was released during a news conference Thursday in Chicago. (BlueRoomStream)

SPRINGFIELD – A task force that Democratic Gov. J.B. Pritzker formed in February is recommending the state consolidate 649 suburban and downstate police and firefighter pension funds into just two, saying that would generate billions of dollars in additional earnings over the next 20 years while cutting the plans’ administrative costs.

But it stopped short of recommending consolidation of other state retirement funds, or the Cook County and Chicago pension funds, saying those are issues that should be reviewed at a later time.

In a 22-page report released Oct. 10, The Pension Consolidation Feasibility Task Force urged lawmakers to consider its plan in the upcoming veto session.

“One of the most critical long-term challenges (for the state) is the need to address unfunded pension liabilities for local governments and the surging property tax burdens that they create,” Pritzker said at a news conference in Chicago.

Authors of the report argued that because most of the local pension plans are relatively small, they don’t enjoy the same kind of investment opportunities as larger funds. On average, their annual earnings are about 2 percentage points lower than larger funds. And because each fund has its own board of trustees and investment managers, they are more expensive to administer.

The report notes that Illinois has the second largest number of public employee pension plans, behind Pennsylvania, and it ranks 42nd out of 50 states for the average amount of total assets in each system. The suburban and downstate police and fire plans have an average of just $22 million in assets per fund, compared to $16.9 billion for each of the six state retirement funds. 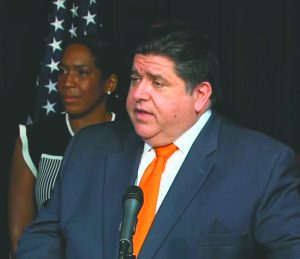 On average, the 649 funds are only 55-percent funded, with 88 of the plans funded at 20 percent or less. Combined, they have a total unfunded liability of $11.5 billion.

By consolidating them into two funds — one for police and one for firefighters — the new funds could generate between $820 million and $2.5 billion in additional earnings in just the first five years, assuming they earn at roughly the same rate as the larger Illinois Municipal Retirement Fund.

Put another way, the report noted, the 649 local pension funds are missing out on roughly $1 million a day in lost earnings potential.

The task force recommended carrying out the consolidation in two phases. The first would be to consolidate the financial assets of the systems into two funds, each with its own board and its own investment manager. The second would be to review the possibility of consolidating their benefit administration systems.

Currently, according to the report, the cost of administering those 659 local plans is significantly higher than it is for larger funds like the Illinois Municipal Retirement Fund or the six statewide plans run by the state of Illinois. By consolidating administration, those plans could save an estimated $14 million a year, but the task force said there might be other forms of consolidation that could save on administrative costs while preserving “local knowledge of unique local cases.”

Pritzker said he expects the consolidation effort to run into opposition, particularly from investment managers and others who make money from managing the 649 small plans.

“I realize that this is going to disrupt their business model, but frankly we have to do what’s best for taxpayers of the state,” he said. “And that’s why this task force made sure that the special interests weren’t in the room, and the people who are directly affected — the retirees, the first responders themselves and the municipalities themselves — were in the room, as well as financial experts, to make sure they were getting the right plan put forward.”