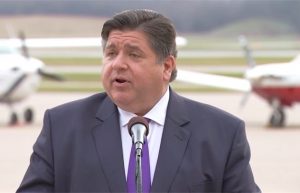 SPRINGFIELD – Nearly 100 airports across Illinois will receive state funding in the coming months for projects ranging from new runways and road relocations to the purchase of mowers and snow removal equipment.

The money comes from the $45 billion Rebuild Illinois capital infrastructure plan which passed the General Assembly and the governor signed into law in 2019. Another $11.5 million for the projects will be contributed by local sources.

Gov. J.B. Pritzker was in Moline Wednesday, Dec. 1 to publicize the funding for 96 airports around the state, including $5.6 million for the Quad Cities International Airport. The Quad Cities funding will go toward entrance road realignment and parking expansion.

“Crucially, these dollars are going first and foremost to projects that might not otherwise be eligible for the full federal funding that they need to finish,” Pritzker said of the Rebuild Illinois funding.

The new expenditures will be used for large, small, rural and urban airports, the governor noted.

The state grants range from $36,000 for the Illinois Valley Regional Airport in LaSalle County to acquire a tractor with a flex wing mower to nearly $11.8 million for the Morris Municipal Airport in Grundy County for a crosswinds runway.

Stan Knudson, a public information officer for the city of Morris, said in a phone call the funding will allow the airport to expand its operations. It currently has a single north-south runway which means certain aircraft can’t land there if the wind is blowing unfavorably. Adding an east-west runway would accommodate more aircraft, he said.

Knudson said that funding would go toward the entire process from engineering to construction, and he was unsure on a timeline for construction. The project is also slated to receive just under $3 million in local funding, according to the governor’s office.

Sen. Sue Rezin, R-Morris, was a supporter for the capital plan when it passed in 2019 and she called the airport an “economic driver within our region.” The project had been in the works since 2003 but was made possible by the 2019 capital bill funding.

“Projects like this are critical for the betterment of our state,” Rezin said. “I would like to thank former Morris Mayor Dick Koczick and Morris Municipal Airport Manager Jeff Bogen for years of hard work and planning they put in to make this new crossroad runway a reality.” 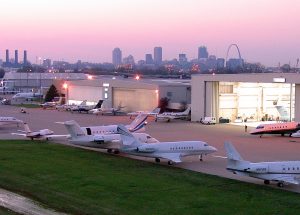 St. Louis Downtown Airport in St. Clair County is slated to receive $5 million for ramp and taxiway access from the airfield, including a jetblast noise mitigation barrier. (Photo courtesy of metrostlouis.org)

Rezin credited the governor and IDOT for approving the plan, and area Rep. David Welter, R-Morris, and current Morris Mayor Chris Brown for advocating for the region.

St. Louis Downtown Airport in St. Clair County is slated to receive $5 million for ramp and taxiway access from the airfield, including a jetblast noise mitigation barrier.

“St. Louis Downtown Airport is a vital economic engine in the Metro East,” Belt said in a news release. “I will continue working with Rep. Latoya Greenwood to bring our tax money home from Springfield in order to maintain and create jobs in our area.”

St. Louis Downtown Airport is the third busiest airport in Illinois and was recognized by the IDOT Division of Aeronautics as the 2021 Reliever Airport of the Year.

The project has been in the planning stages for several years, Belt stated. Construction is anticipated to begin in 2022.

The Cairo Regional Airport near the state’s southern tip will receive $309,000 from the state, including $72,000 to acquire snow removal equipment and $237,033 to replace airport lighting.

The Abraham Lincoln Capital Airport in Springfield will see more than $3 million to rehabilitate its north airport’s public parking lot and roadways. 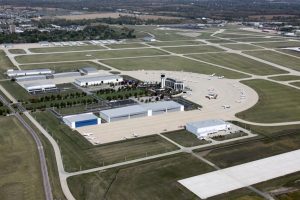 The DuPage Airport in West Chicago will receive more than $1 million in funding for parking improvements and resurfacing of the airport perimeter road. (Photo courtesy of DuPage Airport)

Bolingbrook’s Clow International Airport will receive $2.8 million, $67,500 of which will help replace its rotating beacon, while more than $2.1 million will go toward the construction of a replacement parallel taxiway.

Southern Illinois Airport in Jackson County will see over $1 million, with $252,000 going toward the relocation of Fox Farm Road and $751,000 going to expand the southeast aircraft parking apron.

The Rebuild Illinois plan is a multimodal infrastructure package covering roads, bridges, waterways, air travel and rail, as well as bike and pedestrian pathways. Of the funding for the Rebuild Illinois plan, $33.2 billion is slated to go directly toward transportation in accordance with the state’s 2016 “lock box” amendment that requires the state to use transportation related funds for their stated purpose.

The 2019 plan was largely funded through a doubling of the motor fuel tax to 38 cents, a rate that now goes up annually at the inflation rate. The measure also increased several fees motorists pay to the secretary of state, including registration fees.

The vertical infrastructure component of the bill, which provides for infrastructure improvements on state buildings, is funded through revenues resulting from a massive 2019 gambling expansion and an increase to taxes on cigarettes and e-cigarettes.

A full list of projects can be viewed here.