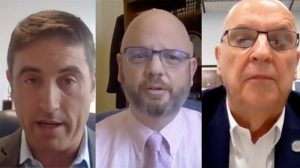 SPRINGFIELD – House Republicans continued to criticize the Pritzker administration Wednesday, Jan, 6 as the Illinois Department of Employment Security works through ongoing staffing and fraud issues related to the COVID-19 pandemic.

Since handling a historic number of unemployment assistance claims at the outset of the pandemic in March, IDES has added staff, changed processes and implemented additional measures to prevent fraudulent claims.

On Wednesday, Jan. 6, some House Republicans continued calls for additional measures to be implemented, such as moving staff from other state departments to assist with the overload of unemployment assistance claims, implementing more anti-fraud measures and holding public hearings to discuss issues at the department.

“It is unacceptable how the governor and the department have responded to this crisis that they themselves have caused,” Rep. Mike Marron, R-Fithian, said Wednesday. “It is my hope that someone at the administration cares enough to listen to our ideas and to start a dialogue.”

IDES officials pushed back on criticisms offered by the Republicans Jan. 6, stating that it is not possible to move employees from other state agencies without substantial training, and that many of the anti-fraud measures being proposed by the Republicans are already in use by the department.

“We are working hard to respond to an economic crisis and stand up five new, complex federal programs while battling fraudsters who have used stolen identities to file for benefits nationwide,” said IDES Acting Director Kristin Richards in a statement.

Richards said the department was already short-staffed as a result of years of budget cuts which left IDES ill-equipped to handle the unprecedented number of claims last spring. The current employee head count is roughly half of what it was 10 years ago, she said.

Since the pandemic began, the department has contracted over 1,000 employees to assist in handling unemployment claims, and has been approved for an increase in staffing and resources for the current fiscal year, which is fiscal year 2021. It continues to hire more employees, she said.

It has also implemented a callback only system which allows an applicant with a question to be placed in a queue to be called back, rather than having to experience extensive waits.

“IDES was given an increased headcount for FY21, but adding full-time employees, as all state hiring does, takes time,” Richards said. “This is especially true for IDES, whose employees possess a unique and complicated skillset to work on issues and deliver services to claimants.”

Richards said a proposal to move employees from other state agencies would be ineffective in fixing delays.

“The legislators’ call for moving state employees from one hollowed out agency to another ignores the nuance of what is involved in these jobs and positions and would create productivity deficits in the agencies from which state employees would be pulled,” Richards said.

Richards said the department has worked to stabilize its operations in order to meet the needs of unemployment support applicants in a timely manner.

“The idea that IDES has disproportionate trouble processing new claims or paying out claims is misleading,” Richards said. “A claimant who provides all the necessary data and submits their claim will be processed in a timely and efficient manner and will receive benefits if they are deemed eligible and continue to certify.”

She said the state has also begun paying out Federal Pandemic Unemployment Compensation, which adds an extra $300 per month to claims from certain individuals collecting unemployment assistance.

But the federal rush to expand unemployment assistance amid the pandemic and associated government shutdowns has led to widespread exploitation of unemployment systems across the nation, including in Illinois. In particular, a federal Pandemic Unemployment Assistance program which allows certain independent contractors to collect benefits has been ripe for fraud.

Richards and the administration have said the fraud is due to a nationwide scheme enabled by data breaches of private companies that have made individuals’ information, such as social security numbers, available to scammers. It is not the result of a breach to state unemployment systems.

Rep. Mike Murphy, R-Springfield, called for the department to implement additional anti-fraud measures, such as a flagging system for out-of-state applicants and multiple failed claims, measures which IDES said it already has in place.

“The above-mentioned anti-fraud measures, and many others that are already in place, have the effect of slowing down the process of distributing (unemployment insurance) benefits — and that is an unavoidable and necessary thing,” Richards said. “But it demonstrates the cruel irony that IDES is being simultaneously besieged by historic unemployment claims and besieged by a globally orchestrated fraud scheme, and that solutions to these problems work against each other. Legislators are telling us to hurry up and make payments but slow down and put more barriers in place to stop fraud.”

Richards said that IDES has been in routine communication with legislators and has done its best to provide timely answers to questions from lawmakers and constituents. But she said additional training and information will be necessary moving forward, citing a “misunderstanding some legislators have of IDES and unemployment insurance.”

The lawmakers, however, continue to call for public hearings to discuss the department’s pandemic response, rather than being reduced to input only through personal conversations with the administration.

“IDES will work with these legislators to create the first cohort of targeted training for elected state officials,” Richards said.