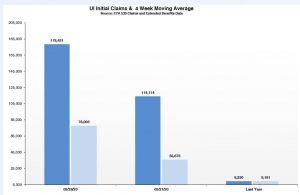 First-time unemployment claims continued to soar in Illinois to more than 178,000 during the fourth week of March as businesses closed their doors in response to the COVID-19 outbreak. (Credit: Illinois Department of Employment Security)

SPRINGFIELD – First-time unemployment claims skyrocketed again in Illinois and throughout the nation in the last week of March as businesses closed their doors or scaled back operations in the face of the COVID-19 pandemic.

The U.S. Department of Labor announced April 2 that 6.6 million Americans filed first-time unemployment claims during the week that ended March 28, including 178,133 workers in Illinois, a 1,539-percent increase over the number of new claims filed the week ending March 14, when the coronavirus-related spike in unemployment first started to appear.

That brings the total for the past two weeks to just fewer than 10 million nationally, and 292,247 for the state of Illinois – numbers that are unprecedented in the history of the unemployment insurance program.

According to the Labor Department, nearly every state that provided comments on their numbers cited the COVID-19 outbreak for the increase. Industries hardest hit included the service sector, most notably accommodation and food services, as well as health care, social services, manufacturing, retail and wholesale trade and construction.

The Washington-based Economic Policy Institute reported Thursday, April 2 that every state in the nation saw huge increases in first-time jobless claims during the week. Michigan saw the largest increase with 311,000 new initial claims, a 5,728 percent increase over the number of initial claims filed in the week ending March 14. Neighboring Indiana saw a 5,533 percent increase over that period, with 146,243 new claims last week.

Under new federal law, most unemployed workers are now eligible for enhanced federal benefits, above and beyond what state unemployment insurance programs provide. In addition, employers with fewer than 500 employees are now required to provide their workers with paid sick leave and paid family and medical leave if the employee is out due to certain reasons related to COVID-19.

Gov. J.B. Pritzker said during his daily briefing on April 1 that the nationwide surge in jobless claims indicates the federal government will need to enact another emergency recovery package, in addition to the $2.2 trillion package Congress passed last week.

“We’re going to have to see another relief package because not only is there an unemployment problem, which hopefully it will only be four months or so long, but there’s also a challenge to all of our city budgets and state budgets, and it goes beyond what was provided in the federal stimulus that was passed just recently,” Pritzker said.

The Pew Charitable Trust released a report April 2  that said all state governments are likely to struggle financially during the crisis because the rising unemployment rate and the precipitous decline in commercial activity will cut deeply into their personal income and sales tax revenues.

“These declines are likely to play out over the course of months because there’s always a lag between changes in a state economy and changes in revenue,” the report stated.

The surge in jobless claims recently prompted the Pritzker administration to impose a moratorium on all residential evictions and utility shutoffs during the current state of disaster. But the deluge of new applications also has strained the capacity of the Illinois Department of Employment Security to handle the volume.

“This administration is fully committed to the health and safety of our workforce and ensuring our workers can provide for their families in this challenging time,” Deputy Gov. Dan Hynes said in a statement. “As we navigate this period of economic uncertainty, we will continue to champion policies that will lift up every Illinoisan while making investments that will help to strengthen our economy.”

“This is the biggest onslaught of unemployment claims I think ever, at least in my lifetime, and even more so than the Great Recession of 2008-2009,” the governor said during his daily media briefing in Chicago.

“But believe me, we’re trying very hard both to answer every call, which is hard to do because we have a system where there just aren’t enough people,” he added. “We’ve asked many of our staff to go stay home, as many businesses are, but we also have nonessential staff there to help augment whoever is there.”

IDES recently implemented an alphabet-based schedule for people to file online claims and for contacting the call center.

People whose last names begin with A through M are asked to file online claims on Sundays, Tuesdays or Thursdays. They can contact the call center on Tuesdays and Thursdays, 7:30 a.m. to 6 p.m.

People with last names starting with N through Z are asked to file claims online claims on Mondays, Wednesdays and Fridays. They can contact the call center on Mondays and Wednesdays, 7:30 a.m. through 6 p.m.

The call center is reserving Fridays from 7:30 a.m. to 6 p.m. for people who are unable to file claims during their allotted time.