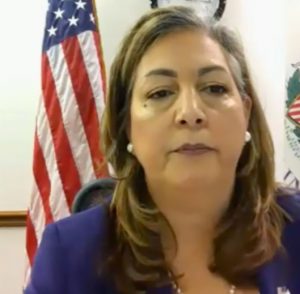 SPRINGFIELD — Illinois Department of Veterans’ Affairs Director Linda Chapa LaVia resigned Monday,  Jan. 11 more than two months after an outbreak was first reported at the LaSalle Veterans’ Home that has killed more than a quarter of the facility’s residents.

Chapa LaVia is the second high-profile departure related to the outbreak at the LaSalle home in the aftermath of the deadly outbreak. LaSalle Veterans’ Home Administrator Angela Melbrech was fired on Dec. 7.

Chapa LaVia’s resignation came after a House Civil Judiciary committee hearing on Monday morning during which members questioned her handling of the outbreak at the LaSalle home, where 36 residents have died of COVID-19 since Nov. 1.

“It’s been an honor and a privilege to serve our veterans,” LaVia said in a news release announcing her resignation effective immediately. “I’m proud of our accomplishments and I look forward to assisting the interim director in any way possible as the department continues its work to serve our heroes.”

Gov. J.B. Pritzker, who appointed Chapa LaVia as IDVA director in February 2019, said during his Monday COVID-19 news conference it was a “mutual decision” for her to resign.

“What we want to do is restore confidence. We want to do our best to take care of our veterans,” Pritzker said. “As you know, Linda Chapa LaVia had served for a number of years in the Legislature. She’s somebody who cares deeply about veterans. Her appointment, as all the appointments of my Cabinet, come up in about a week for reappointment or not. And it was a mutual decision that she would step down.”

Maj. Gen. Peter Nezamis has been named the department’s interim director. He currently serves as the assistant adjutant general – air, at the Illinois Air National Guard.

The lawmakers said Chapa LaVia’s performance during the hearing reflected poor leadership which caused them to lose confidence in her ability to lead the agency.

Welter, whose district covers the veterans home, said Chapa LaVia’s resignation is a necessary step to hold Pritzker’s administration accountable for the deadly outbreak at the LaSalle facility. 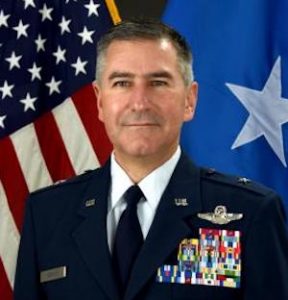 Sen. Sue Rezin, a Morris Republican whose district also includes the LaSalle home, said in a statement that Chapa LaVia’s removal should have come much sooner.

“While I can respect the former director’s decision to resign, I question why the decision to leave the department was left in her hands. The governor should have removed the director from leadership long before today,” Rezin’s statement read.

Following Chapa LaVia’s resignation on Monday, Jan. 11 House Civil Judiciary Chairman Rep. Andre Thapedi, D-Chicago, wrote in a text message to Capitol News Illinois that the systemic problems at the Department of Veterans’ Affairs are enormous and most of them predate Chapa LaVia’s tenure.

“The care and treatment of our most vulnerable people — and especially our heroes — must be entrusted to our most capable and compassionate care givers.  My only hope is that the necessary reforms at nursing homes and veterans homes across the state takes this principal to heart,” Thapedi wrote in the message.

Mazzochi wrote in a statement before Chapa LaVia’s resignation that she was “particularly disturbed” that IDVA had outsourced an investigation on to the state Department of Human Services, “with no concurrent self-assessment on the practices and policies that led to the outbreaks.”

“As members of our committee from both sides of the aisle agree, what they heard today was stonewalling of our legislative investigation; and a distinct lack of corrective action being taken by the agency. And, that no steps were taken to ensure the investigative cooperation of the administrator in charge of the facility at the time is an independent critical oversight error,” Mazzochi’s statement read in part.

Chapa LaVia served as a first lieutenant in the Illinois Army National Guard and is a former state House member.

During the committee hearing, Thapedi also accused Chapa LaVia of a “delay tactic” for not providing information about the outbreak that the committee requested from the facility in December.

House Judiciary Committee members repeatedly pushed back when Chapa LaVia and IDVA Chief of Staff Tony Kolbeck declined to answer questions, due to the independent ongoing investigation by the acting inspector general of the Illinois Department of Human Services.

For example, the Nov. 12 site visit report from the U.S. Department of Veterans Affairs documented that the facility was using a non-alcoholic hand sanitizer, staff were using the same disposable gloves for different activities, and some staff were seen not following personal protective equipment guidelines or socially distancing. The report also mentions that employees who later tested positive for COVID-19 reportedly attended a Halloween party.

In one heated exchange, Mazzochi asked Chapa LaVia why staffers at LaSalle were not following basic safety protocols, such as changing gloves between patients and different tasks.

“Don’t you have intellectual curiosity as to why that happens and who was involved, and whether it was … a training issue with employees? This is a facility still within your control, irrespective of what’s going on with the investigation,” Mazzochi said.

Chapa LaVia said her administration is constantly communicating with leadership at all state-run veterans homes.

“But I can’t micromanage my administrators who are licensed,” she said. “It’s not acceptable, the things that are in that report, and that’s why we immediately and aggressively attacked the issues that they brought to us to make sure that that does not happen.”