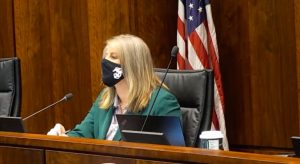 SPRINGFIELD — Infection control efforts at the LaSalle Veterans’ Home have curbed the spread of the coronavirus since a deadly outbreak began at the facility last month, according to officials who testified Wednesday before a House committee investigating the matter.

That outbreak has caused at least 33 resident deaths, the latest of which was reported early last week.

Despite that progress in containing transmission, several lawmakers on the committee raised concerns to IDVA officials the about the state’s response from when the initial outbreak was reported on Nov. 1 to the first on-site visit by an official with the U.S. Department of Veterans Affairs on Nov. 12.

The in-person subject matter hearing, which lasted about three hours, is the committee’s first regarding the root cause of the outbreak at LaSalle. Committee chairwoman Rep. Stephanie Kifowit, D-Oswego, said she expects the committee will have additional hearings into the matter.

Vaughn has been in charge of the home since last week when former administrator Angela Mehlbrech was fired. Kolbeck said he couldn’t comment on her firing because it was a personnel matter.

Kifowit said Illinois Department of Public Health officials declined to attend the hearing — aside from the consultant Hart — citing an ongoing internal investigation into the LaSalle outbreak.

There are currently 16 residents still positive for the virus out of the 93 total residents remaining at LaSalle, and one positive employee, according to an IDVA spokesperson.

Kolbeck said the LaSalle home administrator notified the U.S. Department of Veterans Affairs of the outbreak on Nov. 2, and the LaSalle County Health Department notified IDPH “within the reporting system.”

Kolbeck said he also sent an email on Nov. 9 to IDPH, requesting an on-site visit “to explore potential opportunities for containment and control not otherwise identified.”  On Nov. 11, he said, IDPH had a phone conversation with the facility administrator and the infection control nurse.

Rep. David Welter, R-Morris, asked Chapa LaVia whether she spoke to Gov. J.B. Pritzker about the deaths reported on Nov. 11 when she and Pritzker were together in Chicago for a Veterans Day event.

“We discussed it briefly. And, like I’ve said prior, (Pritzker) has been kept abreast of everything going on,” she said, adding that Pritzker called her later on in the week for an update on the situation at LaSalle.

In response to questions about the immediate response from state and local agencies to the outbreak, Hart said the LaSalle County Health Department is the first line of defense.

“(Local department of public health officials) are the people who actually notify IDPH of the outbreak and send updates to IDPH, and I cannot speak for the local health department. But I am aware that they provided extensive guidance to the La Salle Veterans’ Home in the very early days of the outbreak on a number of topics, including how to manage the cohorting of the residents, how to handle the PPE, etc. So there was an active intervention by the local health department in that very early phase,” Hart said.

Hart said an IDPH team visited the home on Dec. 14 to review the infection control practices put in place since the onsite visits.

That site visit report also documented examples of staff failing to follow proper protocol for personal protective equipment. In one instance staff were observed eating with masks below their chins in the kitchen within six feet of one another.

Hart said at the Dec. 14 visit, staff at the LaSalle facility were found consistently in compliance with Centers for Disease Control and Prevention guidance regarding appropriate hand hygiene, PPE use and social distancing.

He said rapid antigen testing being conducted on home employees prior to every shift and all residents every day “has shown that transmission within the facility has been controlled.”

“We’re not seeing evidence of new transmission within the facility,” Hart said.

Late last month, the IDVA announced the acting inspector general from the Illinois Department of Human Services will conduct an independent investigation into the outbreak. Since then, three separate legislative committees have begun their own inquiries.

As of Dec. 15, the Quincy Veterans’ Home reported a total of three resident deaths related to COVID-19 illnesses and total of 70 residents have tested positive for COVID-19 since the beginning of the pandemic. The facility has reported that 37 residents have recovered.

Manteno Veterans’ Home has reported 17 total resident deaths related to COVID-19 since the beginning of the pandemic, as of Dec. 15. The Manteno home reported 67 total residents have tested positive, and 46 have recovered.

The National Guard members are helping staff with COVID-19 administrative tasks, such as processing COVID-19 testing data and questionnaires for IDVA employees and entering the information into the medical database within 24 hours, an IDVA spokesperson said.