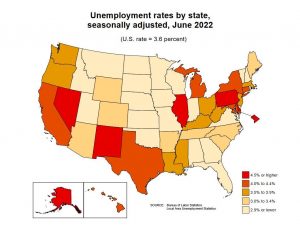 Illinois’ unemployment rate fell to 4.5 percent in June, but it remained higher than the national average. (Credit: U.S. Bureau of Labor Statistics)

SPRINGFIELD – The Illinois economy added 18,800 jobs during June as the unemployment rate fell to 4.5 percent, the lowest it has been since the start of the COVID-19 pandemic.

Preliminary numbers released by the U.S. Bureau of Labor Statistics and the Illinois Department of Employment Security showed the sectors with the biggest gains during June were leisure and hospitality, professional and business services, construction, and educational and health services.

Slight declines were reported in the financial industry and the catch-all category “other services.”

“With the statewide unemployment rate at its lowest since the onset of the pandemic, the data released (Thursday) is a further reflection of continued economic recovery and evidence of a strengthening Illinois labor market,” Deputy Governor Andy Manar said in a statement.

Prior to the pandemic, Illinois had seen its lowest unemployment rate ever, at 3.5 percent in December 2019. It climbed to 4.9 percent in March 2020, when the World Health Organization declared a pandemic existed, and reached a historic high of 17.4 percent in April 2020 after restaurants, bars, theaters and other “nonessential” businesses were ordered to close in an effort to contain the spread of the virus.

The state’s jobless rate has since been on a continuous downward trend as businesses gradually reopened.

The trend in Illinois mirrors what has been happening nationally, although the state continues to lag behind the rest of the country in its recovery. The U.S. unemployment rate stood at 3.6 percent, unchanged from the month before but down from its peak of 14.7 percent in April 2020.

Illinois’ unemployment rate also stood higher than all of its surrounding states. Indiana, Missouri, Iowa and Wisconsin all had jobless rates below 3 percent while Kentucky stood at 3.7 percent. In fact, the 4.5 percent rate recorded in Illinois was the fifth highest in the nation. Pennsylvania and Delaware also were at 4.5 percent.

The economic recovery also has had its downside. Growing employment and rising wages have brought about increased consumer demand at the same time supply chains needed to satisfy that demand have remained bottlenecked, causing prices to spiral upward at an annual rate of 9.1 percent in June.