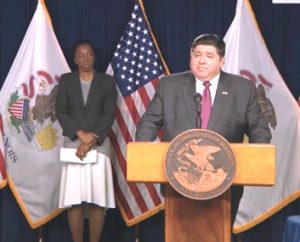 Gov. J.B. Pritzker gives an update on the state’s responses to the coronavirus update during a press event Monday, March 30 in Chicago. (Credit: blueroomstream.com)

SPRINGFIELD – The Illinois Department of Public Health reported 461 new cases of COVID-19 and eight new deaths in the state Monday, March 30 as an outbreak worsened at Stateville Correctional Center in Crest Hill.

IDPH said one of the deceased was an inmate at Stateville, and 12 other inmates from the facility are now hospitalized with several requiring ventilators. IDPH said 77 others imprisoned at the facility have symptoms and are in isolation, and 11 prison staff members are isolated as well.

“The Illinois Department of Corrections is taking a number of steps to control the spread of COVID-19 in its correctional centers,” according to a news release. “Staff who work with individuals in isolation and quarantine, as well as in the health center, are wearing full personal protective equipment (PPE) and all staff are wearing some PPE. Staff are also having their temperature checked daily as they enter the facility.”

IDPH said correctional centers with a confirmed case are placed on lockdown, meaning the only movement in the facility is for medical care, and incarcerated individuals who show symptoms are being tested.

The eight deaths reported Monday were all in people over 50 years of age, with five in their 60s and one in their 70s across four counties.

Clark, Crawford, Marion, Randolph and Saline counties are now reporting cases, meaning the disease has been confirmed in 52 counties in the state, although medical experts have repeatedly warned that the spread is much wider than has been tested.

IDPH is reporting a total of 5,057 cases in Illinois, including 73 deaths, according to the news release. Those affected range from an infant to 99 years of age.

At a news conference Monday in Chicago, Gov. J.B. Pritzker announced plans to temporarily convert part of the McCormick Place Convention Center in Chicago into an alternate care facility for COVID-19 patients with mild symptoms who don’t require intensive care.

The move is an effort to free up hospital beds for patients with severe COVID-19 cases as officials expect a surge in hospitalizations in the coming weeks based on data and trends seen in other large cities, according to the governor’s office.

“Based on science, data, and the guidance of health experts, our approach to fighting this virus is two-pronged: suppress the spread and increase hospital capacity to meet the need,” Pritzker said. “A critical component of increasing our capacity is identifying and building out additional facilities across the state to support our existing hospitals and health care system. In partnership with the city of Chicago and the U.S. Army Corps we are planning to increase capacity, so we’re prepared to treat patients and save lives.”

The McCormick Place project is supported by $15 million in funding from the Federal Emergency Management Agency.

For all personal protective equipment (PPE) donations, email PPE.donations@illinois.gov. For health questions about COVID-19, call the hotline at 1-800-889-3931 or email dph.sick@illinois.gov. Medically trained professionals able to volunteer are asked to sign up at www.illinoishelps.net.