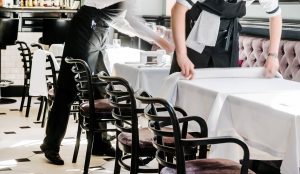 The Leisure and Hospitality sector saw some positive job numbers in December.

The Illinois Department of Employment Security (IDES) announced Friday, Jan. 21 that the unemployment rate fell -0.4 percentage point to 5.3 percent, while nonfarm payrolls increased by 22,800 in December, based on preliminary data provided by the U.S. Bureau of Labor Statistics (BLS) and released by IDES.

In December, the three industry sectors with the largest over-the-month gains in employment were: Professional and Business Services (+9,400), Trade, Transportation and Utilities (+8,500), and Leisure and Hospitality (+2,200). The industry sectors that reported monthly payroll declines were: Financial Activities (-1,800), Educational and Health Services (-300), and Government (-100).

“Today’s data reflects continued encouraging growth across Illinois’ economy,” said Deputy Governor Andy Manar. “Illinois will continue to take collaborative steps to strengthen our workforce and connect workers with employers across the state. IDES encourages job seekers and businesses to utilize tools such as IllinoisJobLink.com, Illinois’ free and accessible job board with over 160,000 available jobs.”

“December payroll numbers are another positive sign for Illinois’ job growth reflecting an ongoing recovery in some of the industries most impacted by the pandemic, such as transportation and hospitality,” said DCEO Acting Director Sylvia I. Garcia.

Compared to a year ago, nonfarm payroll employment increased by 262,600 jobs, with gains across nearly all major industries. The industry groups with the largest jobs increases were: Leisure and Hospitality (+126,000), Trade, Transportation and Utilities (+48,300), and Professional and Business Services (+28,600). Financial Activities (-5,000) was the only industry group that reported jobs losses. In December, total nonfarm payrolls were up 4.7 percent over-the-year in Illinois and up 4.5 percent in the nation.