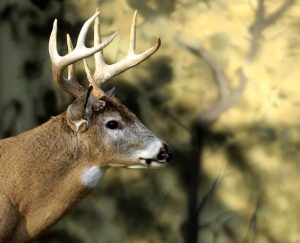 In 2020, more than 43 percent of crashes involving deer in Illinois occurred in October, November and December, (Photo courtesy of IDNR)

During this time of year, deer become especially active, mainly at dawn and dusk from October through December.

“Although a collision with a deer can happen any time of year, we are entering the peak season,” said Illinois Transportation Secretary Omer Osman. “Deer can often appear suddenly in some surprising environments so you are urged to be on alert. Slow down, pay attention in areas where they are known to travel and remember – don’t veer for deer. While the urge to swerve is instinctual, it could cause you to lose control of your vehicle and increase the severity of a crash.”

In 2020, 13,787 motor vehicle crashes involved deer in Illinois. Of these, 13,166 resulted in damage to property or vehicles, while 611 caused personal injuries. Ten of the crashes resulted in fatalities.

The top 10 Illinois counties for crashes involving deer in 2020:

“Whether in rural or urban areas, deer are part of the Illinois landscape and we need to be alert to their presence,” said Illinois Department of Natural Resources Director Colleen Callahan. “Please be cautious while on the road as deer are particularly active during the mating season in the fall and during busy driving times around dawn and dusk.”

If you hit a deer, pull off to the shoulder, turn on your hazard lights and call 911 to report the accident. Do not exit the vehicle to check on an injured deer or pull it from the road.

For information on how to claim a deer involved in a crash, or to report possession of a deer killed in a deer-vehicle crash, click here or visit the IDNR website.