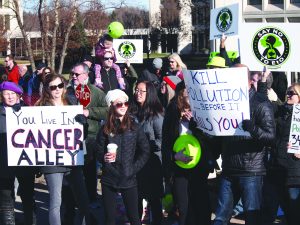 Crowds gathered outside Sterigenics facility in Willowbrook to protest in December 2018. Residents and lawmakers were concerned over carcinogens released into the air. (Chronicle Media photo)

SPRINGFIELD – A clash over a court filing that would pave the way for the reopening of a medical sterilization company linked to increased cancer rates could result in a special legislative session.

Democratic Gov. J.B. Pritzker raised the possibility of a special session in a joint July 18 Thursday night news release from him and Attorney General Kwame Raoul.

The news release was aimed at addressing blowback from a proposed consent order between the state, DuPage County and Sterigenics, a suburban Willowbrook company which uses cancer-causing ethylene oxide in its medical supply sterilization process. A judge is set to rule on whether the consent order filed by Raoul and DuPage County State’s Attorney Robert Berlin can move forward next Wednesday.

“At this time, the only option remaining is for (House Republican) Leader (Jim) Durkin to propose new legislation that will fix the perceived shortcomings of the legislation that he sponsored and worked to pass,” Pritzker’s statement said. “I made it clear to Leader Durkin this morning that, if he requests it, I will call a special session of the Legislature to allow for an immediate vote on a bill that is constitutional and will fix the perceived shortcomings of the legislation he previously sponsored.”

The pending consent order provides that Sterigenics would not be allowed to reopen if it does not install new equipment to comply with new regulations in the Durkin-sponsored legislation that Pritzker referred to. To install that equipment, Sterigenics would need building permit approval from the Illinois Environmental Protection Agency.

The bill, which was signed into law by Pritzker in June, also mandates emissions and air quality testing that, if failed, would require immediate cessation of any sterilization procedures. Democrats and Republicans hailed it as creating the strictest ethylene oxide emissions standards in the country.

It did not, however, expressly prohibit Sterigenics from being released from a February seal order which was enacted by the IEPA at the behest of Pritzker to prevent it from operating. The consent order would remove that seal order.

Durkin issued a response statement calling on the governor to introduce his own legislation.

“As I told Gov. Pritzker yesterday, the legislation supported by the Illinois Environmental Council is not the problem. Unfortunately, Gov. Pritzker and his regulators are willing to fast track the reopening of Sterigenics by entering into a settlement agreement with the corporate polluter to lift the seal order,” he said in a statement. “If the governor is not happy with the legislation he signed into law, I recommend he introduce his own legislation in the General Assembly and call a special session to take it up for consideration. I stand by my legislation which was signed into law by the governor.”

Durkin and fellow suburban Republican Sens. John Curran, of Downers Grove, and Deanne Mazzochi, of Elmhurst — all of whom represent Willowbrook or the surrounding areas — have been calling for a reversal of the consent order.

While Durkin said the state should abandon the consent order and continue to fight Sterigencis in court, Raoul said in a statement the new agreement prevents the company from exploiting loopholes that could have allowed it to reopen without installing new equipment to limit ethylene oxide emissions.

“Under the new law, emissions reduction requirements are not effective until Dec. 18 — under the consent order, Sterigenics will not be able to reopen until it is able to meet those requirements,” Raoul said. “The suggestion that continuing the litigation over the seal order would provide greater protection to residents is inaccurate and uninformed. The very real risk that continued litigation could result in Sterigenics being able to reopen before installing any new emissions controls — while still operating under its existing permit that authorized it to emit 36,400 pounds of (ethylene oxide) per year — was unacceptable.”

Raoul said the consent order will allow Sterigenics to release only 85 pounds of ethylene oxide per year.

Curran, who sponsored Senate Bill 1852 in the Senate, said he asked Raoul’s office to delay next week’s hearing and implementation of the settlement agreement but was denied. On Thursday, he criticized the lack of punitive fines and the lack of a requirement for admission of wrongdoing from the company.

“This delay would provide for greater public input on their proposed agreement, an agreement that provides Sterigenics with a road map to open, and fails to hold them accountable for their past environmental violations that have damaged the public’s health in and around the Willowbrook area,” Curran said in the release.

When asked Friday if a special session date is imminent, both Durkin and Pritzker’s offices referred to their public releases.