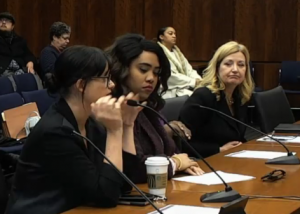 Kim Mercer-Schleider (left), director of the Illinois Council on Developmental Disabilities, said the state has “significant choices to make in regard to the type of housing and support it offers to individuals with DD.” On the state Senate panel with Mercer-Schleider were (from left) Mariel Hamer, associate director of program and policy for the ICDD, and Teresa Parks of Metamora, who has a son with Down syndrome. (BlueRoomStream.com)

Vincent Smith loves the independence he has living on his own.

The 38-year-old Chicago resident with developmental disabilities appreciates the freedom he has living in his own apartment.

“I do not have to live in a nursing home or state institution,” Smith said. “I go to bed when I want to go to bed. I decide how my day will be spent and how I will live.”

All it took was a keyless entry for his apartment in order for him to live independently, Smith said before a state Senate panel convened Nov. 6 in Chicago to examine housing options for the disabled.

Smith said that when his mom, his primary caregiver, died three years ago, his world was forever changed.

“I wanted to remain in my community, live with my nondisabled peers, live how I want to,” he said.

Moving from a nonhandicapped-accessible building to a unit with handicap accessibility made all the difference, he said.

Teresa Parks of Metamora has a son with Down syndrome. At 27, her son, Nathan, works two part-time jobs and still lives at home with his parents. He gets 36 hours of support services every week, but his condition requires constant monitoring, his mother said.

“What keeps me up at night is ensuring that Nathan will get state support, that his 24-hour support outlasts his father and mother,” Parks told members of the state Senate’s Human Services Committee.

She said community integrated living arrangements are something the state needs to examine as it would benefit both disabled residents and state coffers. Parks said institutionalizing a disabled individual can cost the state as much as $280,000 a year.

“Illinois can support this since it’s a cost-effective option,” Parks said. “If representatives in the state of Missouri can make this happen, why not Illinois?”

Kim Mercer-Schleider, director of the Illinois Council on Developmental Disabilities, said the council continues to work on behalf of individuals with developmental disabilities to get them into the housing they choose in the neighborhoods they choose.

“The state of Illinois has significant choices to make in regard to the type of housing and support it offers to individuals with DD,” Mercer-Schleider said. “Over the past years, growing demand for new alternatives, requirements from consent decrees and federal changes have placed pressure on decision-makers to invest in options that provide people with DD more integration into society.”

She said Illinois has not provided the same amount of funding for supportive services as other states, coupled with its reliance on antiquated housing models, gives residents with developmental disabilities here fewer options for living arrangements.

Even if only 20 percent of people in those two groups wanted supportive services living, she said, that would be 9,789 individuals seeking supported residences.

“Self-advocates only want to live on their terms in a place that they choose,” Mercer-Schleider said of individuals with developmental disabilities, “not just who has an open bed.”

Allison Stark, director of the Division of Developmental Disabilities for the Illinois Department of Human Services, said there are 11,000 Illinois  residents living in group homes called community integrated living arrangements. Most CILAs in Illinois, Stark said, have the operator providing both the housing and support.

Other states, like Missouri, she said, have disentangled the housing and support, working on getting residents housing first and then having the support follow.

“Missouri’s done a much better job of communicating how this can work,” Stark said.

She added that Missouri is also a technology-first state, meaning the state tries to look at technology for the disabled before other supports like staffing. Stark said some people can remain in their homes through the use of technology, such as someone who might only need help remembering to turn off the oven after cooking. A sensor can be installed on the oven to send a signal to a caregiver or service provider organization that the oven has not been turned off after a certain amount of time, Stark said.

The oven can also be programmed to eventually turn off automatically, she noted.

“This is an example of how a remote support is kind of the first line of support for an individual instead of relying on a staff person having to be in the home with the individual when they are cooking,” Stark said.

She said technology could help alleviate the staffing crisis for support workers the state is currently feeling.

Stark noted that there are 106 people with developmental disabilities on the state’s wait list for rent-controlled units. She said people can be on the wait list anywhere from six months to four years.