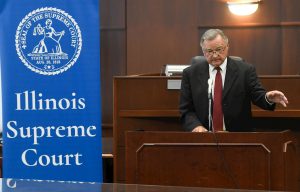 Karmeier said “almost every one” of the cases the state’s highest court has considered over the 15 years he has spent on the bench has been “interesting.” Perhaps the most important were two that established state employee pensions as an undiminishable benefit as guaranteed by the Constitution.

The 79-year-old justice tendered notice last week he will resign from the Supreme Court, effective Dec. 6, 2020. It comes after his three-year term as chief justice concluded Oct. 25.

In his letter, he wrote, “It has been a privilege serving the people of Illinois.”

During his tenure leading the court, Karmeier helped secure a budget increase of about $60.5 million, the judicial branch’s first boost in six years. Court officials said the money will be used in part to reimburse costs paid by local governments for probation services.

In an effort to elevate the public profile of the judiciary, Karmeier has continued the tradition of “riding the circuit” about once per year. The seven justices travel to a different college each year to conduct oral arguments.

Members of the court also have a Law School for Legislators program, send daily and monthly newsletters, and have expanded a system to assist self-represented litigants.

Karmeier was first elected to the Supreme Court in 2004 in what then was the most expensive judicial election in U.S. history.

Below is an interview, edited for length and clarity, with Karmeier in his offices in Nashville on a range of legal, philosophical and personal topics.

Justice Lloyd Karmeier: I grew up on a small farm about 14 miles from here. And my father farmed my grandmother’s land and had some other rental property, which turned out to be the site of the first courthouse for Washington County, which was located at Covington. Covington, which is north and west of here, was right on the banks of the Kaskaskia River and was centrally located when Clinton and Washington were one. So the county seat was there — the first courthouse [and] first jail were built there. My dad started farming in about 1946 or ‘47. There were trees in a certain area, there were noticeable mounds, red brick and foundation stone.

And my dad told me that’s where the courthouse was, and that the Supreme Court sat there and I thought he didn’t know what he was talking about. It was confirmed for me … that when the Supreme Court consisted of three members, the court also rode circuit — I mean, they individually were the circuit judges and the Supreme, and sometimes they ruled on cases that they ruled on as circuit judges and they reviewed them as Supreme. John Reynolds who was a Supreme Court justice from our area, sat there in March of 1819, conducting the first session court in the state of Illinois, coming to Washington County on land that my father farmed and that I plowed and harrowed and did all the farming things with.

Someplace here I still have a box of some of the rocks from there. I’ve given some to the Washington County Courthouse here, and to the new judicial center.

The judicial branch is also one of the most expensive for citizens to access, not that a lot of citizens perhaps want to interact with the judicial branch. I think some of that stems from the Legislature passing mandatory fees and fines.

You know, ideally, the Legislature would fully fund the courts, and if they took the position that providing access to the courts is a right that people are entitled to, they would not pass different fees on different services. But the Legislature tries to recoup those costs by assessing fees. You know, somebody might be fined $1,000 and then end up with $3,000 because of fees that are mandated by the Legislature.

One of the things that the Legislature did recently, with the help of a study in which the court had input, … is to revise the fines and fees to make it simplified so people can understand it and to try and reduce the cost, … so that people who cannot afford it can still get their day in court. Interestingly enough, right after that was passed, which we thought would be great, legislation has been introduced already to try and add … fees, into other areas. I don’t think it’s gone anyplace yet, but that was introduced.

… If the Legislature fully funded the courts rather than relying on fees, it would be less expensive, but that’s probably not going to happen because the state is not flush and counties can’t always pick up the difference.

Is there an area of law that is perhaps more undecided than another? And I ask because when the court was in Godfrey [to “ride the circuit”], both of the cases seemed to sort of fall into the changing role of technology and society versus a law that is perhaps antiquated, and how they might interact with each other.

So, technology, while it’s great, has raised more questions. The one good thing about all of this, it keeps me people like me in business. … You think that everything that could possibly be a matter of conjecture or matter of dispute has been resolved, but it has not.

Do you think — I think you mentioned this in the Senate budget hearing — when recreational marijuana becomes legal in January, perhaps the number of those cases might dwindle, too?

I think I said we don’t know where that’s going. We don’t, because maybe with more people using marijuana, we’re going to have more driving under the influence of drugs. We don’t know that, whether that’s a direct correlation.

The minor marijuana cases, you know, a couple of grams for personal use — I don’t even know how much people need for personal use — but those will be gone, and that’s good. That takes time, and those people should not be going to prison. And of course, there’s been a sea change, I think, over the last 20 years in attitudes toward marijuana. I would hope it doesn’t come into places for sale here in Washington County, but if it is, it’s legal.

[It’s] still not legal federally on the national level, so it’s an interesting conundrum for people who are trying to set up shop. So, you know, we don’t know how that’s going to play out — probably fewer criminal cases, better concentration and time allocated to the more serious cases, with probation officers with court personnel judges and everyone.

Isn’t that a conundrum for the Supreme Court, too? To balance; it’s legal statutorily here, but it’s not legal federally.

Well, it is. If cases are brought under state law, our court is the final provider of that. That can’t be appealed to the U.S. Supreme Court. If we decide cases based upon federal law, we’re subject to and we are bound by U.S. Supreme Court decisions. If someone charges a federal violation, I think that’s going to be charged in federal court.

Oh, so you wouldn’t hear it necessarily?

So we wouldn’t hear it.

The history of the court, at least since the 1964 judicial article which went into the 1970 Illinois Constitution almost entirely, is [it] is the most senior member of the court who has not previously served, no matter whether upstate or downstate. Now, there was a hiccup in that a few years ago. But that’s been established.

The problem with [alternating] Cook County [and] downstate is that Cook County would have the chief justice half the time, but it only has 3/7ths of the court. So, it is seniority. It’s not a given that you’re going to be elected. You’re still elected by your contemporaries, or your colleagues. We follow that tradition pretty well.

I was surprised to learn from the announcement of Chief Justice [Anne] Burke’s appointment that she’s only the third woman to serve out of 121 justices.

Well, and the first one was Justice [Mary Ann] McMorrow, who served until about 2005, so I’ve served with all of them. And Justice McMorrow was the first woman on the court.

That’s not that long ago.

No. She was elected in 1992. [Justice Charles] Freeman was selected in 1990, the first African-American. We’ve got a long way to go. But now we have three female members of the court. As we leave, there might be another one.

And you know, what I’ve seen in other states, it’s not unusual … to [have] more female members than not. When I was in law school, there were two women in my class. Now the percentage is more women than men. So through the … product and more time and people practicing, there are going to be more women judges and more who are on the [Illinois Supreme] court.

When you assumed the chief justice role, or were preparing to do so, about three years ago, did you receive any advice? Is there any of that advice or any of your own that you have passed along to Chief Justice Burke?

I would say this, and can say this with regard to Chief Justice Burke also: Our court is very collegial. We get along with each other and we want everyone to succeed. And Justice [Rita] Garman was helpful to me when we were making the change. … Justice Burke and her staff were here a week ago today [Oct. 28]. We spent several hours going through what might come up and how to handle it. Those things are very helpful, and I hope Justice Burke does well, just as Justice Garman and Justice [Thomas] Killbride and [Justice Robert] Thomas before me.

The specific advice I’m not going to go into, but there were some things that were said just to keep things moving. When … we’re in conference in Springfield, the chief justice is at the head of the table and controls his or her own agenda that is presented. Anybody can put things on that. But you have to make sure those matters get heard and get followed up on.

Now that your chief justice term has ended, do you have thoughts on what your lasting sort of impact was?

What I’ve been told, that the reconstitution of the Judicial Conference from about 80-some members to 29 … and the Strategic Agenda that we fashioned and unveiled on October 2 will be, for better or worse, my legacy, whether that works or not, and it will be up to Chief Justice Burke and her successors to carry this forward.

What’s next for you? Is it going to be weird sitting a couple seats … down?

I’ll be two over. … We sit in seniority. And I’ll take Justice Burke’s seat. She’s junior to me — right after me. But that’s where I’ll go, and she’ll be.

Yeah, it’ll be different. In fact, I just said to one of my senior staff attorneys, “Steve, we’re not getting as many calls or emails already.” We were constantly, you know, “What are we going to do about this,” “What’s this?” “Let me know what’s going on here.” And I just sent a note to Marcia Meis, our [Administrative Office] director. I said, “I’m going to miss conversing with you as often.” She takes everything now to the chief justice where it belongs. And I’ve been told … you kind of like the period because you can be a little more laid back. I found that over the weekend, I wasn’t thinking, “What have I missed? What do I have to do for the coming term?”