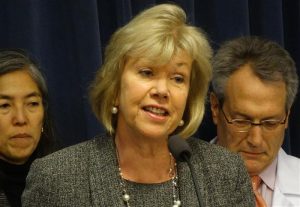 Sen. Julie Morrison, a Democrat from Deerfield, speaks during a February 2019 news event in Springfield about raising the minimum age to purchase tobacco products in Illinois to 21. The legislation passed later in the session, and Morrison said this week she intends to propose legislation focusing on mitigating e-cigarette use among Illinois youth. (Capitol News Illinois photo by Peter Hancock)

That trend of increasing e-cigarette, hookah and vape pen use is on par with the U.S. at large, which the nation’s wellness protection agency noted was a factor that prompted the surgeon general to proclaim electronic tobacco use an “epidemic.”

But in Illinois, electronic cigarettes are not included in a statewide ban of smoking at virtually all public places, taxes on the products are not “at parity” with traditional tobacco products and legislative proposals to ban flavored electronic products were not addressed by the General Assembly this session.

“We need to make sure that we’re treating electronic cigarettes just as we are combustible cigarettes,” Sen. Julie Morrison, a Democrat from Deerfield and long-time anti-tobacco advocate, said in a phone interview. “We were doing so well on changing the culture of smoking and now, especially the younger generation has gone backward.”

Crews added that funding for education programs “is abysmal.” An analysis performed by her organization found Illinois’ cancer reduction policies compared favorably to other states in all but one area — funding for its cessation program.

The CDC recommends the state spend $136.7 million on related initiatives, but Illinois allocates just $9.1 million — 6.7 percent of the recommended level — according to the American Cancer Society report

“Although current use of cigarettes, cigars, and smokeless tobacco among U.S. high school students has decreased, tobacco product usage has evolved, and the increasing prevalence of electronic vapor product use among youths during recent years is concerning,” according to the CDC survey. “Implementing evidence-based tobacco control strategies, combined with (the U.S. Food and Drug Administration’s) regulatory efforts, is important for preventing and reducing all forms of tobacco product use among youths.”

The federal agency also found roughly one in five Illinois high school students used electronic tobacco products at least one day during the 30-day period before responding to its survey. Nationwide, that number was approximately one third of high school students.

Results also indicated that half of Illinois high school students surveyed did not attempt to quit using tobacco products in 2019.

“The fact that half of all high schoolers surveyed say they have used an electronic tobacco products (e-cigarette) and the frequency with which current e-cigarette users are using these products shows we need to do better to keep these products out of kids’ hands,” Lissa Lacasse, president of the American Cancer Society Cancer Action Network, said in a written statement. “There is no safe level of use of tobacco products, and no reason for a child to be using an e-cigarette.”

The CDC report was released less than two weeks after preliminary research conducted at Stanford University suggested those who sometimes use e-cigarettes are five times more likely to be diagnosed with the novel coronavirus disease.

“Emerging research has already shown that e-cigarette use may increase coronavirus infection and cause more severe cases of lung disease — and we are only beginning to understand the lasting health impacts of this virus,” Dr. Ravi Kalhan, director of Northwestern University’s Asthma and COPD Program, said in a written statement. “Just a year after we first saw unprecedented cases of lung illness related to vaping, and now facing the COVID-19 pandemic, it is especially concerning to see a growing number of teens are putting themselves at risk by using e-cigarettes.”

Crews said that while she and her colleagues are aware of the Stanford University study and find the conclusions concerning, more analysis is needed to establish a “good body of research.”

The fact that scientists have noticed a preliminary correlation indicates that e-cigarette and vape usage “is dangerous” and causes lung damage, Morrison said.

“I intend to reintroduce some legislation to try and tighten the law up and get us back on track to encourage young people to quit smoking,” she added.

In addition to her measure banning flavored electronic tobacco products from Illinois, she is also spearheading an initiative that originated in Attorney General Kwame Raoul’s office. Senate Bill 3699 is “a really good bill,” Morrison said, that specifies advertising regulations for e-cigarettes, changes the age to purchase such products to 21 and alters how electronic tobacco products are taxed, among other aspects.

The legislation never left the Senate’s gatehouse committee and will need to be reintroduced in January.