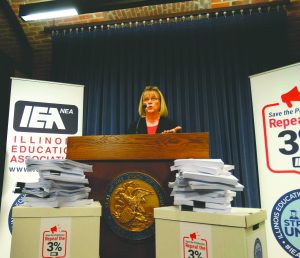 Kathi Griffin, president of the Illinois Education Association, delivers more than 55,000 petition signatures urging state lawmakers to remove the state’s 3% cap on annual salary increases for educators in the Illinois Teachers Retirement System. She spoke during a news conference Wednesday at the Capitol in Springfield. (Photo by Peter Hancock/Capitol News Illinois)

SPRINGFIELD — The state’s largest teachers’ union on Wednesday, May 22 called on Illinois lawmakers to lift a state-imposed cap on the size of pay raises they can receive, saying the current 3% cap is driving many teachers out of the state.

Standing in front of stacks of petitions containing more than 55,000 signatures, and surrounded by educators from several school districts and Illinois State University, Illinois Education Association President Kathi Griffin said raising the cap is needed, “to help save the teaching profession.”

“We all agree the threshold is hurting students, educators and the teaching profession,” Griffin said.

The 3% cap was imposed last year as a way to hold down the state’s share of the cost of funding teacher pensions. Per the law, if a school district that is part of the Teachers Retirement System, or a higher education institution that is part of the State Universities Retirement System, provides any educator with more than a 3% increase during the last 10 years of their careers, then that employer is responsible for paying all of the associated pension costs resulting from that raise.

The cap was intended to prevent what some people have called pension “spiking.” That is, giving someone a large pay increase in their final year, or final months of service to raise their “final average salary” which is used to calculate pension benefits.

But Kevin Gannon, president of the local teachers’ union in Geneva, said the cap limits the ability of veteran teachers to take on additional duties such as coaching, directing plays and musicals, or filling in for colleagues when they’re out sick and the district can’t find a qualified substitute.

“When it comes to coaching sports and other extras, the district is bringing in less-qualified people to fill those rolls rather than violate the 3% threshold,” Gannon said.

In April, the Illinois Senate passed Senate Bill 1952 which, among other things, would have raised the cap back to 6%, which is what Griffin said IEA is asking for. However, a House committee voted earlier this month to strip out that portion of the bill. It is now awaiting a final vote on the floor of the House.

Illinois has about $135 billion in unfunded pension liabilities, and the Teachers Retirement System accounts for about three-fourths of that liability. The state is operating under a plan to bring that up to a 90% funded ratio by 2044.

Officials at the news conference did not say how much additional money it would cost the state to take on the additional cost of funding the pension system with higher annual pay raises.