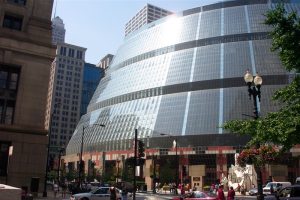 The state will use proceeds from the sale of the Thompson Center to purchase another nearby building in Chicago Loop. (Photo courtesy of Chicago Architecture Tour)

SPRINGFIELD – After years of failed efforts that spanned multiple administrations, the state has finalized the sale of the controversial James R. Thompson Center in Chicago to a company that will make it the new Chicago home of tech giant Google.

Gov. J.B. Pritzker made the announcement during a news conference at the building, along with Chicago Mayor Lori Lightfoot and officials from the development company and Google. Pritzker said the sale will save the state millions on deferred maintenance costs.

“When the project is done, the first Googlers will be walking into this atrium for an entirely redeveloped and truly magnificent experience, one that comes as Google continues to dramatically expand its footprint in Illinois,” Pritzker said.

But its unique, postmodern design, which some have compared to a spaceship, has long been the subject of both praise and criticism, and its high cost of maintenance and operations, estimated at $17 million a year, has been a drain on state resources.

In 2003, then-Gov. Rod Blagojevich, a Democrat, proposed selling the building, but that deal never went through and with state funding cuts, it began to fall into disrepair. Former Gov. Bruce Rauner, a Republican, also proposed selling it in 2015 and again in 2017, but lawmakers at that time could not agree on a plan amid the ongoing two-year budget impasse, which led to further deferred maintenance on the building.

A 2016 cost study estimated it would take $300 million to bring the building into good repair, and the governor’s office said that cost is projected to increase to over $525 million if maintenance needs are not addressed by 2026.

In 2019, Pritzker signed legislation that had originally passed the General Assembly two years earlier authorizing a new process of trying to sell the building through a competitive bidding process. And in January 2021 officials announced plans to begin moving employees out of the Thompson Center into another building the state had purchased for $73.5 million at 555 W. Monroe.

Then in December 2021, officials announced tentative plans to sell the building for $70 million to JRTC Holdings LLC, a firm managed by real estate developer Michael W. Reschke and the Capri Investment Group. Under that deal, the state would have purchased back 425,000 square feet of newly renovated office space and it would have contributed $148 million for its share of the renovations.

Under the new agreement announced Wednesday, however, the state will sell the entire building for $105 million and use $75 million of that to buy another building nearby in the central Loop area, at 115 S. LaSalle, currently the headquarters of BMO Harris Bank which plans to relocate.

JRTC Holdings will perform the renovations on the LaSalle building to accommodate the state’s operations after BMO Harris Bank vacates the building. The improvements there are expected to take 18 months with partial occupancy expected within eight months from the closing, the governor’s office said in a news release

“This trade was a huge win-win for everyone,” Reschke said. “Google was able to secure 100 percent of this iconic building for future headquarters and the state will now own 50 percent more space on LaSalle Street at 50 percent less cost.”

Google, which is headquartered in Mountain View, California, has had a presence in Chicago since 2000. It currently employs about 2,000 employees in the city’s Fulton Market area.

Karen Sauder, Google’s president of global clients and agency solutions, said the company eventually plans to buy the building itself in order to bring its employees into the downtown area.

“The way we see it, the Thompson Center is more than just a building,” she said. “Establishing a presence here in the loop allows us to get in on the ground floor of revitalizing and breathing new life into the very heart of the city. Just as we’re proud of the role we played in turning Fulton Market into one of the most vibrant and energetic neighborhoods in the city, we have the opportunity to do it all over again here.”

The moves by the state are part of a larger effort to optimize its real estate holdings in downtown Chicago.

Prior to those efforts, the state owned three buildings in the area, including the Thompson Center, and leased office space in seven other buildings. Together, according to the Department of Central Management Services, those properties exceeded 2.3 million square feet.

Cathy Kwiatkowski, deputy director of CMS, said in an email that the state only needs about 1.7 million square feet, a need that could be met by buying two buildings, terminating six private leases and maintaining leases only in publicly owned buildings.

CMS estimates the optimization effort will reduce its downtown Chicago real estate portfolio by more than 475,000 square feet by 2024.

The governor’s office estimated the consolidation will save the state nearly $1 billion over 30 years.