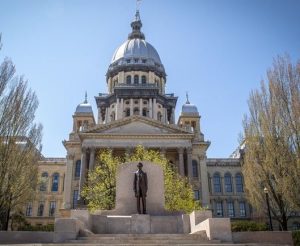 SPRINGFIELD – Gov. J.B. Pritzker and top Democratic leaders in the Illinois General Assembly said Tuesday, July 5 that while they still plan to call a special session this year to strengthen abortion rights, they expect to take the “remainder of the summer” to craft policies before lawmakers return to the Capitol.

While the governor said at the time he would call the special session with support from Senate President Don Harmon, D-Oak Park, and House Speaker Emanuel “Chris” Welch, D-Hillside, he did not set a specific date for lawmakers to return. He said only he would call the session “in the coming weeks.”

In a joint statement July 5, the three leaders indicated the return to Springfield could come as late as the fall.

“In the coming weeks, as the ripples of the decision to overturn Roe are felt throughout the nation, we expect to get an acute sense of our needs and how Illinois can play an even more vital role in standing up for reproductive freedom,” the statement read. “We plan to work closely together for the remainder of the summer to assess every possibility of what we can do and convene a special session in the coming months.”

Illinois already has among the most permissive laws in the country regarding abortion.

In 2019, Pritzker signed the sweeping Reproductive Health Act which, among other things, declares access to abortion services a “fundamental right” in Illinois. And in December, he signed a law making it legal to perform an abortion on a minor without notifying the minor’s parents.

Illinois also allows public funding of abortion services for people enrolled in the state’s Medicaid program, the result of a 2017 law signed by then-Gov. Bruce Rauner, a Republican.

However, as a result of the U.S. Supreme Court’s ruling in Dobbs v. Jackson Women’s Health Organization, more restrictive laws have automatically taken effect through so-called “trigger laws” in some of Illinois’ neighboring states, including Missouri, Wisconsin and Kentucky.

That has led many to anticipate that Illinois could see a large influx of residents from those states coming to Illinois for abortion services.

During a June 30 interview with Capitol News Illinois, Pritzker suggested one response might be to expand segments of the state’s health care workforce to take on greater demand.

“Again, this is about securing access, making sure we have capacity to handle the needs of people to get procedures,” he said. “We need hospital personnel, health care personnel. Other states, for example, allow certain kinds of professionals to perform these procedures that Illinois doesn’t allow. So we’re going to look at expanding who can do the procedures.”

During that interview, Pritzker also said the state would not consider providing aid for out-of-state travel to Illinois for abortions.