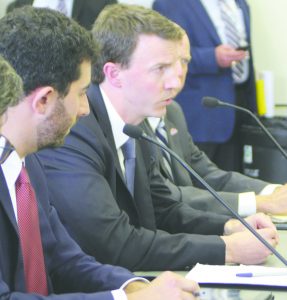 Bryan Seeley, deputy general counsel of investigations for Major League Baseball, testifies Wednesday at the Capitol in Springfield in favor of a royalty fee going to MLB and the National Basketball Association in exchange for the leagues providing official data to the state if it legalizes sports gambling. (BlueRoomStream.com)

SPRINGFIELD — There are now almost as many different plans to legalize sports betting in Illinois as there are states that have legalized it in any fashion.

As Indiana Gov. Eric Holcomb on Wednesday, May 8 signed a sports betting bill in that state – making it the ninth state to do so since a U.S. Supreme Court ruling last year allowed the practice – lawmakers in Illinois unleashed two more plans for stakeholders to consider, bringing the total number of plans in Illinois to seven.

The two plans were filed just hours before a House subcommittee MET to discuss sports gambling in Illinois, leaving testifiers the difficult task of deciding their stance on the new plans without having had much time to review them.

Each amendment outlines yet another system by which lawmakers hope to support Gov. J.B. Pritzker’s goal of bringing more than $200 million in sports wagering revenues to Illinois in the next fiscal year.

The first plan would allow both online sports gambling and brick-and-mortar betting at the state’s casinos, race tracks, betting parlors and video gambling terminals. Licensing fees would range from $5 million to $10 million, while wagering would be taxed at 25 percent.

Under that plan, the Illinois Lottery could also allow wagering in 2,500 retail locations, with a $30 million initial license fee and a 100-percent tax.

The second plan limits the number of licenses to seven for brick-and-mortar locations and three for online operators. Licensing fees in this plan range from $5 million to $20 million, but the 25 percent tax on wagering stays the same.

Also under the second plan, professional sports leagues would be paid a 0.2-percent royalty in exchange for official league data. Representatives from Major League Baseball and the National Basketball Association said their data is the speediest and most accurate available, and that they could boost the sports betting industry in Illinois if they were the sole providers of data.

“If we are being compensated by the casinos, we have a financial incentive to drive up the amount of money bet in Illinois,” said Bryan Seeley of MLB.

Rep. Jonathan Carroll, a Democrat from Northbrook, questioned whether third-party data providers don’t already supply speedy data to operators, and wondered what the leagues would do to increase betting in the state.

“If our state is looking to generate revenue, … what is the return on investment,” Carroll asked, referring to the league royalty fees.

Representatives from the state’s race tracks and horsemen’s associations were also present, and made arguments that sports betting should be coupled with expanded gambling at race tracks to bring back business.

Josh Whitman, the director of athletics at the University of Illinois at Urbana-Champaign, spoke on behalf of 12 of the state’s 13 Division I schools – all except Chicago State University – when he opposed allowing sports betting on collegiate athletics.

Both plans introduced Wednesday include restrictions on betting on Illinois collegiate teams.

Zalewski, the amendments’ sponsor, encouraged stakeholders at the end of the hearing to figure out exactly what parts of each plan they support, and how many votes the provisions would garner in the General Assembly.