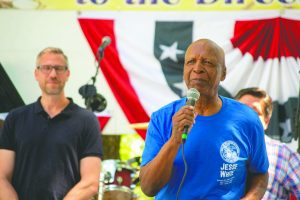 Secretary of State Jesse White speaks during a Governor’s Day picnic Aug. 14 at the Illinois State Fair in Springfield. White’s spokesman, Dave Drucker, said Monday that the secretary of state denied a request from the U.S. Census Bureau’s Data Acquisition Branch on Sept. 17 for citizenship status and other information from the agency’s driver’s license database. (Capitol News Illinois file photo by Jerry Nowicki)

SPRINGFIELD — Illinois Secretary of State Jesse White’s office confirmed Sept. 23 it denied what appears to be the federal government’s latest attempt to gather data about noncitizens living in the United States, this time through driver’s license information.

White’s spokesman, Dave Drucker, said during a phone interview Sept. 23 with Capitol News Illinois that the agency received the request from the U.S. Census Bureau’s Data Acquisition Branch on Sept. 17, and promptly denied the request.

According to an email distributed Sept. 23 by the American Association of Motor Vehicle Administrators and obtained by Capitol News Illinois, the Census Bureau has been seeking driver and identity card information — including the name, address, date of birth, sex, race, eye color and citizenship status.

Anne S. Ferro, president and CEO of the association, said in the email that she had received “several” inquiries from motor vehicle administrators around the country regarding the Census Bureau’s data request.

“I recommend that you discuss this request with your agency’s or state’s privacy officer before responding,” Ferro said in the email.

Earlier this year, the U.S. Department of Commerce, which oversees the Census Bureau, proposed adding a question to the 2020 census asking whether or not each household member is a U.S. citizen, but that effort was ultimately blocked by the U.S. Supreme Court.

Drucker also said that White, a Democrat, expressed public opposition to adding a citizenship question. White’s office also has a longstanding policy, which the secretary of state has proposed codifying into law, of not giving federal agencies full access to the state’s database of driver’s license and ID card information.

Illinois does not record a person’s race or citizenship status on driver’s license applications, although it does require a Social Security number. The state also issues what are known as “temporary visitor’s licenses” to people who have lived in the state for at least a year but do not qualify for a Social Security number or cannot provide documentation of legal residency from the U.S. Citizenship and Immigration Services.