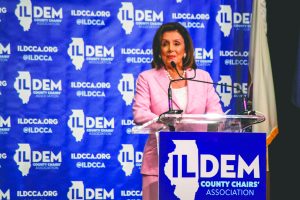 U.S. House Speaker Nancy Pelosi speaks to a crowd of about 2,000 people at the annual Democratic County Chairs’ Association brunch Wednesday, Aug. 14 at the Crowne Plaza Hotel in Springfield. Pelosi said Illinois proved during the recent session of its General Assembly that “a mainstream agenda can also be a progressive agenda.” (Photo by Jerry Nowicki/Capitol News Illinois)

American values — especially the ones “centered on the kitchen table” — are what join them together under the party umbrella, she said in her keynote address at the annual Democratic County Chairs’ Association brunch, which coincided with Governor’s Day at the Illinois State Fair.

“I’m so thrilled to be here for many reasons — to pay my respects to all of you, to bring a message from our Democrats in the Congress — but also to catch the spark of Illinois, to catch the spark of the heartland of America, where our victory in 2020 will spring from,” Pelosi, a Democrat from California, said before a crowd of more than 2,000 people.

Gov. J.B. Pritzker also fired up the crowd, rattling off a list of major accomplishments achieved during the 2019 legislative session that he said showed the rest of the country “what happens when Democrats get to work.”

Those accomplishments include the passage of a law to raise the minimum wage to $15 hourly by 2025, criminal justice reforms, legalization of adult-use recreational marijuana, a proposed constitutional amendment to allow a graduated income tax, a $45 billion capital infrastructure plan and reproductive health legislation that enshrines access to abortion services as a fundamental right.

“Folks, the days of trying to shame Democrats for fighting for social and economic justice for working families, well those days are over,” Pritzker said. “Right now, there is a battle being waged for the soul of our nation, and in the last eight months, Illinois has found its anthem.”

The call for party unity, however, came against the backdrop of an increasingly visible rift within the Democratic caucus between the liberal and more moderate wings of the party, both nationally and within the Prairie State.

Pelosi, 79, has dealt with that in the U.S. House as a small group of young, liberal freshman women known as “the Squad” have openly criticized some of her management decisions.

It has also been visible within the crowded field of Democratic candidates for the 2020 presidential nomination. Liberal-leaning candidates like Massachusetts Sen. Elizabeth Warren and California Sen. Kamala Harris have openly sparred with the more moderate former Vice President Joe Biden.

Pelosi, however, tried to minimize the importance of that rift.

The legislative accomplishments of the Illinois General Assembly show that “a mainstream agenda can also be a progressive agenda,” she said. “It has been proven in Illinois. Let’s make that happen for the rest of the country.

State lawmakers were not always on the same page when it came to the major reforms approved by the session’s end on June 2. Negotiations were held to work out key details on legislation allowing recreational marijuana use for adults, expanding gambling and sports betting and bringing support to a measure greatly expanding access to reproductive health care.

State Sen. Toi Hutchinson (D-Olympia Fields) said after the event the most important thing for Democrats going into the 2020 elections will be finding a unifying message and expanding the party’s voter base.

SPRINGFIELD — The state’s elected constitutional officers — all of whom are Democrats — took to the Illinois State Fairgrounds on Aug. 14 for Gov. J.B. Pritzker’s first Governor’s Day Picnic.

The event followed a gathering of more than 2,000 Democrats, including U.S. House Speaker Nancy Pelosi, at a Springfield hotel earlier in the day. 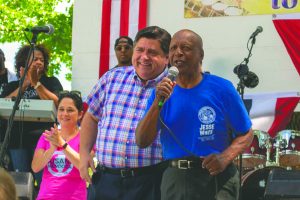 Secretary of State Jesse White gets a laugh out of Gov. J.B. Pritzker during the Governor’s Day Picnic on the Director’s Lawn at the Illinois State Fair in Springfield. White, 85, told reporters when asked whether he would serve his full four-year term, “I used to jump out of airplanes. I did 35 jumps with the 101st Airborne Division,” he said. “And when you jump out of an airplane, you never jump and stop halfway, it’s all the way.” (Photo by Jerry Nowicki/Capitol News Illinois)

While Pritzker said he invited Republicans in an effort to break tradition and make the Governor’s Day event “bipartisan,” none appeared with the governor or his fellow constitutional officers during their public remarks.

“Well they were sent invitations …,” Pritzker said during a media interview after his public remarks. “A number of them said they were surprised when they opened up the invitation. … But look, … I’ve tried to bring back bipartisanship in this state. It’s important to me that we all work together. We have too many challenges in the state for us to be divided and working against each other.”

In his public remarks, Pritzker touted the success of the fair and said this year’s grandstand ticket sales set an all-time record high.

He was followed by Secretary of State Jesse White, the 85-year-old who has held the post since 1999. White said he was asked if he would serve out the full four-year term he was just elected to or if he would step down halfway through.

“I used to jump out of airplanes. I did 35 jumps with the 101st Airborne Division,” he said. “And when you jump out of an airplane, you never jump and stop halfway, it’s all the way.”

Treasurer Mike Frerichs plugged college and retirement savings programs and the Achieving a Better Life Experience savings programs for people with disabilities and their families, all of which can be found at illinoistreasurer.gov. 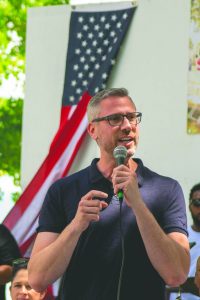 Comptroller Susana Mendoza publicized a recent executive order she signed to focus on enforcing the prevailing wage in light of a new capital infrastructure bill, and Attorney General Kwame Raoul focused on enforcing a recent minimum wage increase and working on reducing gun violence among other initiatives.

He said his office established a violence protection unit to “keep and collect and provide law enforcement with data” to “bring to justice” people who traffic guns into the wrong hands.

During a media interview after the public remarks, Raoul declined comment on pending legal issues faced by state Sen. Tom Cullerton, a Villa Park Democrat who was recently indicted on federal charges of embezzling money from a labor union.

He also declined to comment as to whether Republican U.S. President Donald Trump should commute the sentence of former Democratic Gov. Rod Blagojevich, who is in the middle of a 14-year sentence for various corruption charges.

“I’m really not paying much attention to that. I have so much other matters to pay attention to,” he said.

The same Director’s Lawn will play host to the state GOP Thursday for its annual Republican Day Rally.