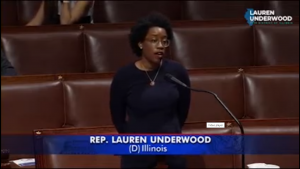 U.S. Rep. Lauren Underwood, D-14th, is celebrating the passage of her legislation to lower health-insurance premiums as part of broader patient protection measures.

The measure passed the House by a 234-179 vote.  Illinois congressional reps voted along party lines, with Democrats voting “Yea” and Republicans voting “Nay.” The legislation now moves to the U.S. Senate for consideration.

“Illinois families have struggled to afford their health care for decades, which has kept people from accessing the coverage they need and deserve,” Underwood said. “It is unacceptable in the United States of America — we have to do better.

“So, since I stepped foot in the Capitol, I’ve been fighting every day to bring down health care costs. That work has become even more urgent as many of our neighbors have lost their jobs, and with it, their employer-sponsored insurance. I am beaming with pride that my colleagues joined me in the fight to act boldly for families across this country and passed my legislation.”

According to Underwood,  Kaylee Heap of Minooka said she would love to work on the family farm with her husband and grow their business, but she could not do that “until we overcome the obstacle of getting quality, affordable health insurance.”

Underwood said people like Heap is why she introduced a measure as part of the Affordable Care Enhancement Act to allow people to buy a Marketplace health plan for 8.5 percent of their income or less, reducing the premium costs by hundreds or thousands of dollars for consumers who buy their own insurance.

“An estimated 27 million Americans can lose their insurance in this pandemic,” Underwood said in a June 29 press call. “My priority from Day 1 has been to make health care more affordable and accessible.”

Underwood noted she has continued to champion legislation to strengthen the country’s health care system by reducing costs and protecting Americans with pre-existing conditions.

In March 2019, Underwood first introduced the Health Care Affordability Act to lower premiums for consumers who purchase plans through the Health Insurance Marketplace.

The Health Care Affordability Act would expand tax credits to people who do not qualify for them because their income is higher than 400 percent of the federal poverty level, and would increase the size of the tax credit for all income brackets.

In May 2019, legislation that Underwood introduced to help protect Americans with pre-existing conditions passed the U.S. House of Representatives. The legislation would overturn a Trump administration rule that expands short-term, limited-duration insurance, commonly known as “junk plans.”

The bill followed action by the administration that finalized a rule expanding short-term, limited-duration health insurance plans that do not have to offer patient protections like coverage for pre-existing conditions or health benefits that the Affordable Care Act requires.