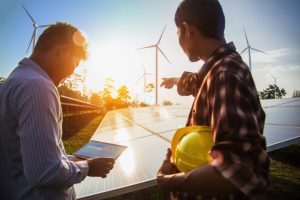 SPRINGFIELD – As the clean energy conversation in Illinois continues, a coalition of lawmakers and labor unions introduced another regulatory overhaul bill that focuses on employing union workers as the state begins to transition to a clean energy economy.

It also aims to expand subsidies for noncarbon-emitting electricity sources, likely through an increase in ratepayer funding for clean energy projects. That includes further subsidies for some Illinois nuclear plants, which are staffed by union workers, but all of which are also owned by Exelon, the parent company of scandal-ridden Commonwealth Edison.

Sponsors said the bill would be filed Monday, March 29 as amendments to House Bill 1472 and Senate Bill 1100, but bill language was not available as of that Monday afternoon, although advocates distributed a lengthy summary of its measures.

It’s the latest measure filed of several that aim to overhaul the clean energy landscape, and its advocates — including the powerful AFL-CIO federation of labor unions — said its focus on union labor sets it apart from other proposals.

“This bill should be our starting point,” Hoffman said at the news conference. “It should be the foundation for the future of legislation that we put together as we begin the negotiations. And it’s because this bill puts people first, it creates jobs and economic opportunity it provides for clean energy, it provides a clean air and energy security.”

The advocates said they have been in discussions with sponsors of the various other energy overhaul measures, such as the Clean Energy Jobs Act and the Path to 100 Act, as well as the governor’s office, and all parties agree that negotiations are ongoing.

The Clean Energy Jobs Act, or CEJA, is an overhaul of the state’s energy industry crafted with a focus on carbon reduction as well as social and environmental justice. Proponents of both measures cite goals of increasing accountability for utility companies as well.

Rep. Ann Williams, a Chicago Democrat and the chief sponsor of CEJA, said although all parties involved in the energy conversation may not fully agree, CEJA should be the foundation of the conversation because of its equity-based approach and input from Illinois residents.

“At the end of the day, I think our goals are aligned [with CUJA],” Williams said in an interview. “We understand that you cannot pass, nor should you pass an energy bill without significant input from our labor partners, and I consider organized labor to be a critical part of developing the consensus to move the package forward.”

CUJA sponsors emphasized the job creation aspect of their bill. 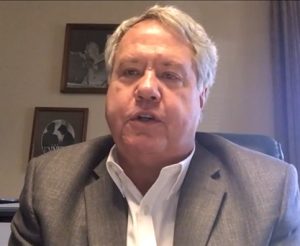 Rep. Jay Hoffman, D-Swansea, speaks in favor of the Climate Union Jobs Act Monday, March 29 in a virtual news conference. The wide-ranging measure is backed by a coalition of labor unions. (Zoom.us)

Hastings cited an article by Vox regarding wariness of the move to wind and solar jobs from some major unions. The article said that currently in the United States, there are 28 utility-scale farms being built and 21 of those projects are nonunion. On the solar side, 40 out of the 61 utility-scale solar projects being built are nonunion solar jobs.

“The bill we have introduced is going to transform those numbers to simple requirements,” said Hastings. “If you use money from the state of Illinois for energy renewable projects, you should use a highly trained, highly qualified workforce. And I know that the men and women of organized labor are there to get the job done right. Especially after COVID, given all the issues that we have seen with unemployment, it’s time to put people back to work.”

Rezin said many of her constituents, and thousands of others, are employed by nuclear plants near their communities. She said that without these plants, state and local communities would lose millions of dollars in tax revenue that keeps schools, libraries and emergency services going.

The nuclear plant subsidies created by CUJA are necessary to preserve that tax base, advocates said.

“What makes this legislation different from other ideas out there, and yes we do share the same goals as many others, is that it puts working people first,” said Rezin. “If we let the plants prematurely go offline…it would take 35 years to catch up and generate as much carbon free energy as we can.”

The legislation would also establish a Displaced Energy Workers Bill of Rights that would provide advance notice of power plant or coal mine closure, employment assistance, career services, full-tuition scholarships for Illinois institutions and trade schools, financial planning services and some insurance benefits.

CUJA would also create a state-run capacity market separate from those run through the PJM and MISO energy grids. This would allow the state to better target capacity payments to non-carbon-emitting sources, but there are still several details to work out as negotiations continue.

The bill is proposing to double the budget of the Renewable Portfolio Standard, a requirement for utilities to source 25 percent of their electricity from renewables by 2025. That money is funded by a charge on ratepayer bills.

A quarter of the new renewable energy credits would be earmarked for a carbon-free schools program in an effort to equip most school buildings across the state with solar panels over a 10-year period.

Pat Devaney, secretary treasurer for Illinois AFL-CIO, said he believes that the benefits outweigh the costs and investments of the bill.

“If we’re going to meet our renewable goals and our clean energy generation in our state, it’s going to require keeping both our nuclear fleet going as it currently exists, as well as significant investments in renewables that match the load needs across the state,” Devaney said.