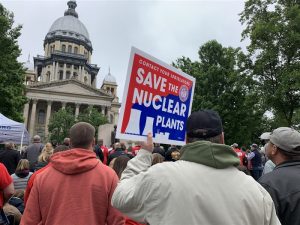 Hundreds of union workers joined a bipartisan group of lawmakers in front of the Illinois Capitol Friday, May 28 in support of the state’s nuclear power industry. (Capitol News Illinois photo by Grace Barbic)

SPRINGFIELD – Hundreds of union workers joined a bipartisan group of lawmakers Friday, May 28 in front of the Illinois Capitol in support of the state’s nuclear power industry

The rally came with just four days remaining in the legislative session and amid a complicated backdrop for the state’s nuclear power industry, which proponents say creates about 28,000 jobs statewide.

Illinois has six nuclear stations which supply more than half of the state’s carbon-free energy. All of them are owned and operated by Exelon Corporation, the parent company of scandal-ridden utility giant Commonwealth Edison.

Last year, ComEd entered a deferred prosecution agreement with federal authorities in which they admitted to attempts to “influence and reward Public Official A,” who was identified as former House Speaker Michael Madigan, for that person’s favorable action on legislation. Madigan has not been charged, but several other former ComEd officials have been indicted.

Madigan’s former chief of staff was indicted May 26 on charges that he lied under oath and obstructed justice, and he pleaded not guilty on Friday, May 28, according to the Chicago Sun-Times.

“We will not support a bill which is simply a handout for utilities and does not prioritize climate and equity — we must be forward thinking and lead with these issues. Our constituents and communities will support nothing less,” the caucus members wrote in the letter.

One of the major questions left to be decided as lawmakers look to draft a compromise energy plan before May 31 adjournment is what level of subsidy Exelon will receive for at least two nuclear plants — one in Byron, one in Dresden — that it has threatened to close without legislative action.

Supporters of the Climate Union Jobs Act, the union-backed energy proposal being considered in energy negotiations with the governor’s working group, touted nuclear energy’s reliability as a carbon-free resource.

“If we lose (the energy negotiation) it’ll be 35 years until we’re able to replace that (nuclear) energy with renewable resources like solar and wind. Losing is not an option. Winning means we save 30,000 jobs and billions of dollars in economic development,” said Democratic Sen. Michael Hastings, of Tinley Park, chief sponsor of CUJA.

Hastings is also chairman of the Senate Energy and Public Utilities Committee. He was joined at the rally by Republican Sen. Sue Rezin, of Morris, Chicago Democrat Rep. Marcus Evans Jr. and House Republican Leader Jim Durkin of Western Springs.

The 2016 Future Energy Jobs Act, approved by the General Assembly and tied by federal prosecutors to ComEd’s admitted bribery scheme, allows Exelon to rack up $2.3 billion in subsidies which were funded by electricity customers to maintain two of its nuclear plants. That equaled more than $230 million per year for 10 years.

The governor’s plan offered about $70 million in subsidies each year for the next five years to the Byron and Dresden plants. Negotiations on a final amount continue.

CUJA advocates, such as Kent Bugg, president of the Fair Assessment Information Resource Committee, or FAIRCOM, said nuclear plant closures would have a devastating immediate impact on communities. Bugg is also the superintendent of Coal City School District 1.

“If the Dresden station closes in November of this year, the Coal City school district loses 60 percent of its property tax revenue overnight,” Bugg said. “If that happens, there’s two choices, drastically increase the tax burden on our residents or slash our educational programming and slash emergency services to a fraction of what they were before.”

“But it will hold people accountable,” Hastings said at the rally without naming any companies. “It’ll hold those people that cast a dark cloud over our state that caused this whole problem. This bill would have been passed a long time ago if it wasn’t for them, and we’re gonna hold them to the highest ethical standards that we can.”

The Climate Jobs Illinois coalition said state leaders still haven’t found a way to “sufficiently” fund the nuclear plants that provide “clean energy,” which is why they suggest a 10-year bridge contract provision.

“If the market prices increase (providing higher payment for power generated), the bill includes a mechanism that would dynamically respond, lowering the credit value offered to the nuclear plants to protect consumers from paying more than necessary to operate them,” according to a news release.

Durkin said at the rally that the “entire Republican Caucus” is standing to ensure the nuclear fleet will continue to operate in Illinois.

“Republicans are 100 percent committed in the House of Representatives to finding a solution to this problem, one that is fair to everyone, not only you (workers) but also consumers, also everyone who relies upon good clean energy in the state of Illinois,” Durkin said.

Should an energy proposal pass, it would likely contain provisions from several bills before the General Assembly.