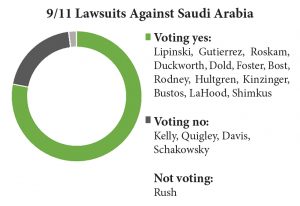 9/11 Lawsuits Against Saudi Arabia: Voting 348 for and 77 against, the House on Sept. 28 overrode President Obama’s veto of a bill (S 2040) that would give families of 9/11 victims standing to sue Saudi Arabia in federal court for any role by the kingdom or its top leaders in assisting the attacks of 15 years ago. Coming after a Senate override vote (below), this put the bill into law. Under the bill, U.S. courts could waive the Foreign Sovereign Immunity Act of 1976 in suits alleging Saudi complicity in the attacks. President Obama said the legislation would invite retaliation in foreign courts against America’s vast global operations.

Bob Goodlatte, R-Va., said: “We can no longer allow those who injure and kill Americans to hide behind legal loopholes denying justice to the victims of terrorism.”

Robert Scott, D-Va., asked: “If the United States (allows) our citizens to haul foreign nations into American courts, what would we think of other nations enacting legislation allowing their citizens to do the same thing to us?

A yes vote was to override the presidential veto. 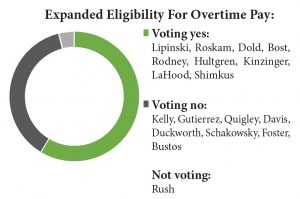 Expanded Eligibility For Overtime Pay: Voting 246 for and 177 against, the House on Sept. 28 passed a bill (HR 6094) intended to kill a new Department of Labor rule that would sharply raise the salary level for qualifying for overtime pay under the Fair Labor Standards Act. At present, salaried employees lose their eligibility for overtime pay when they receive more than $455 per week or $23,660 annually. Under the new rule, the thresholds double to $913 per week and $47,476 annually. The rule takes effect Dec. 1 and is projected to boost the paychecks of four million workers in its first year. Overtime pay, which kicks in after 40 hours worked in a given week, amounts to time-and-a-half the normal compensation rate.

Virginia Foxx, R-N.C., said the Department of Labor rule “is significantly increasing the cost of delivering services and is making it more difficult to maintain existing staffing levels,” costing “hardworking Americans hours at work or even their jobs.”

Jim McGovern, D-Mass., said: “Republicans like to say that they think hard work should be rewarded. This is it. This overtime protection is a way for us to reward the hard work of millions of Americans who are doing all of the right things.” 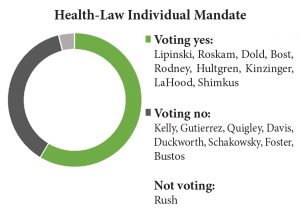 Health-Law Individual Mandate: Voting 258 for and 165 against, the House on Sept. 27 passed a bill (HR 954) that would waive the Affordable Care Act’s individual mandate for persons enrolled in so-called CO-OP health plans that closed for financial reasons. The individual mandate requires Americans to have health insurance or pay a penalty to the IRS. CO-OPs are member-controlled, non-profit plans tailored to underserved markets. Although many CO-OPs have closed because of financial losses, the Department of Health and Human Services has taken steps to salvage those that remain and restore others. The bill posed a clash between Republicans, who are in their seventh year of attempting to dismember the health law, and Democrats, who say the law’s weaknesses should fixed just as other major federal programs are improved over time rather than discarded.

Michael Burgess, R-Texas, said: “The CO-OP model was fundamentally unsound from the start, another example of this administration’s propensity to conduct dangerous experiments with our nation’s health care.”

Jared Polis, D-Colo., said: “Instead of discussing ways to roll back the successes of the Affordable Care Act or do massive bailouts, we should be discussing ways (to) make the law work better….” 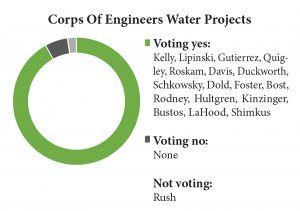 Corps Of Engineers Water Projects: Voting 399 for and 25 against, the House on Sept. 28 passed a bill (HR 5303) that would authorize $5 billion over two years for dozens of U.S. Army Corps of Engineers flood-control, river-navigation and harbor-dredging  projects, including especially large ones in California, Georgia, Louisiana, North Dakota and Texas. In addition, the bill cancels $5 billion worth of long-dormant projects and converts discretionary spending from the Harbor Improvements Trust Fund to entitlement (guaranteed) spending.

A yes vote was to pass the bill, which will receive Senate action later this year. 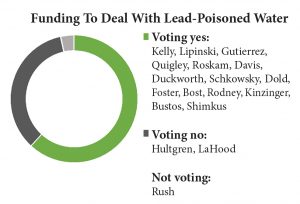 Funding To Deal With Lead-Poisoned Water: Voting 284 for and 141 against, the House on Sept. 28 adopted an amendment that would authorize $170 million to HR 5303 (above) for Corps of Engineers projects to help Flint, Mich., and other communities replace drinking-water pipes that are contaminated by lead.

Dale Kildee, D-Mich., who represents Flint, said: “My constituents have been waiting for the help they need for more than a year, since they were told their drinking water was poisoned.”

No member spoke against the amendment.

A yes vote was to provide targeted aid to Flint and several other cities with lead problems. 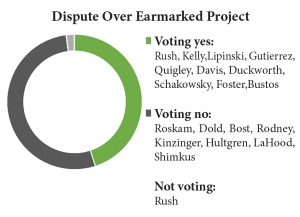 Dispute Over Earmarked Project: Voting 181 for and 243 against, the House on Sept. 28 defeated a Democratic bid to strip HR 5303 (above) of an $810 million earmark for the Upper Trinity River flood-control and waterfront-development project in Fort Worth, Texas. The motion also required the secretary of the Army to determine that the project is “economically justified.” Critics, including the National Taxpayers Union, say the funding is an earmark that would pay for athletic fields and a splash park, while defenders say the project’s recreational features would be built with local funds.

Peter DeFazio, D-Ore., urged members “not to do an earmark…and require this project to be economically justified and not to construct sports facilities.”

Bill Shuster, R-Pa., said the Corps of Engineers has “made it clear that it is not responsible for constructing baseball fields, basketball courts and soccer fields” with federal funds.

A yes vote was to strip the Upper Trinity River earmark from the bill. 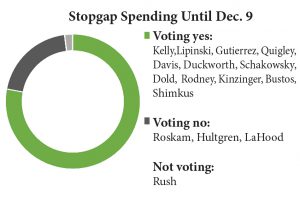 Stopgap Spending Until Dec. 9: Voting 342 for and 85 against, the House on Sept. 28 joined the Senate (below) in passing a bill (HR 5325) that would fund government operations from the start of fiscal 2017 on Oct. 1 until Dec. 9. The bill would provide $1.1 billion to address the Zika virus and $500 million to help Louisiana and other states recover from flooding in August. In addition, the bill includes a regular fiscal 2017 budget for veterans programs that is 4 percent above the 2016 level.

Harold Rogers, R-Ky., said the bill “helps us avoid the unwarranted damage of a government shutdown by providing the funds required to keep the government open and operational” beyond Sept. 30.

No member spoke against the bill during brief, late-night debate.

A yes vote was to send the bill to President Obama, who signed it into law. 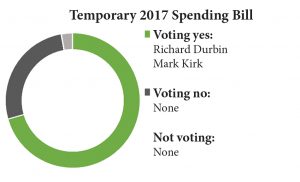 Temporary 2017 Spending Bill: Voting 72 for and 26 against, the Senate on Sept. 28 passed a bill (HR 5325) that would fund government operations from Oct. 1 until Dec. 9, by which time lawmakers hope to have approved a longer-term budget bill. This stopgap measure bill would provide $1.1 billion to address the Zika virus and $500 million to help Louisiana and other states recover from flooding in August. It also would fund a full-year 2017 budget for the Department of Veterans Affairs that is 4 percent above the 2016 level.

Bill Cassidy, R-La., said: “Let’s do what is right and pass this legislation so we can help relieve these flood victims” in Louisiana and other states.

Debbie Stabenow, D-Mich., said: “Unfortunately, the (bill) addresses disaster funding for flooding in Louisiana and other communities, but asks the families of Flint to wait at the back of the line again.”

A yes vote was to send the bill to the House. 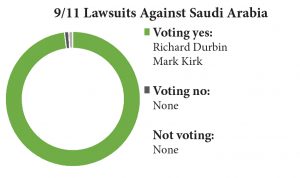 9/11 Lawsuits Against Saudi Arabia: Voting 97 for and one against, the Senate on Sept. 28 went far beyond the two-thirds majority required to override President Obama’s veto of a bill (S 2040) that would give families of 9/11 victims standing to sue Saudi Arabia in federal court for any role the kingdom played in the attacks on American soil. Under the bill, U.S. courts could waive the Foreign Sovereign Immunity Act of 1976 in suits alleging Saudi complicity in the terrorist assaults.

Richard Blumenthal, D-Conn., said: “If the Saudi Government had no involvement in 9/11, it has nothing to fear. But if it was culpable, it should be held accountable. That is the basic principle of this measure.”

In his veto message, Obama said the bill “does not enhance the safety of Americans from terrorist attacks, and undermines core U.S. interests.”

A yes vote was to override the veto.

— How They Vote. Illinois Representatives’ Votes in Congress —