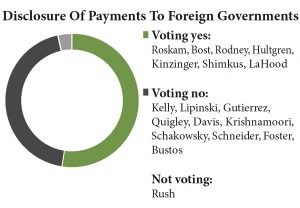 Disclosure of Payments to Foreign Governments: The House on Feb. 1 voted, 235 for and 187 against, to nullify a Securities and Exchange Commission (SEC) rule under which publicly traded companies must disclose their payments to foreign governments for access to oil, natural gas, coal and other mineral resources. Part of the 2010 Dodd-Frank law, the rule is opposed by energy firms such as ExxonMobil and business groups such as the U.S. Chamber of Commerce on grounds it puts American companies at a competitive disadvantage. But supporters said it would provide essential information about these companies to investors while spotlighting possible corruption by foreign leaders. Nullification of the rule would occur under terms of the Congressional Review Act.

Keith Rothfus, R-Pa., said: “Ensuring that payments by oil, gas and other mineral companies are transparent and accountable is a worthwhile public policy goal, but it is outside the (SEC’s) core mission of investor protection.”

Bill Foster, D-Ill., said these disclosures “provide investors with crucial information for valuing securities (and) enable investors to make ethical values-based decisions on where they allocate their resources — a right that we should be enhancing rather than eroding.”

A yes vote was to send the measure (HJ Res 41) to the Senate, where it was passed and sent to President Trump for his expected signature. 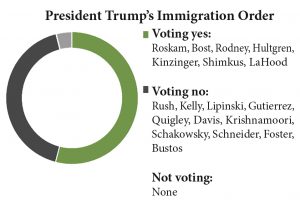 President Trump’s Immigration Order: Voting 231 for and 191 against, the House on Feb. 1 killed a parliamentary move by Democrats that sought to force debate on a bill now in committee that would rescind President Trump’s newly issued order on immigrants and refugees. Democrats took this procedural step during debate on H Res 71 after the Republican majority denied them a chance to offer amendments to an underlying bill. Trump’s order suspends immigration from seven mainly Muslim countries for 90 days, indefinitely bars Syrian refugees from the U.S. and suspends for at least 120 days the entry of refugees from all other countries.

During brief debate on the motion, no member spoke in defense of the immigration order.

A yes vote was to quash a Democratic attempt to rescind Trump’s order on immigrants and refugees. 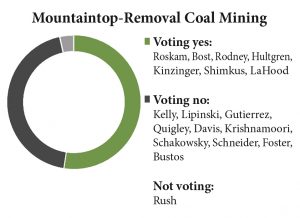 Mountaintop-Removal Coal Mining: Voting 228 for and 194 against, the House on Feb. 1 passed a GOP-sponsored measure (HJ Res 38) that would nullify a new federal rule aimed at protecting streams and drinking water in Appalachian states from pollution caused by mountaintop-removal coal mining. The rule addresses the practice of companies blasting mountaintops and then dumping fractured rocks and other debris into nearby streams and valleys. Critics denounced the rule as a part of a “war on coal.”

According to the Department of the Interior, the rule would outlaw “mining practices that permanently pollute streams, destroy drinking water sources, increase flood risk and threaten forests,” and would require coal companies to restore streams and mined areas. The rule is designed to protect 6,000 miles of streams and 52,000 acres of forests over two decades while allowing coal companies to continue meeting U.S. energy needs, the department said. The rule has not yet been put into operation.

Frank Pallone, D-N.J., said: “If this rule were to be overturned, American families living near impacted streams and rivers will not be protected from toxic chemicals getting into their water.”

A yes vote was to send the measure (HJ Res 38) to the Senate, where it was passed and sent to President Trump for his expected signature. 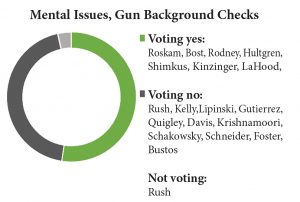 Mental Issues, Gun Background Checks: The House on Feb. 2 voted, 235 for and 180 against, to nullify an Obama Administration rule designed to keep the mentally ill from passing federal background checks on gun purchases. Under the rule, the Social Security Administration is required to notify the FBI’s National Instant Criminal Background Check System of individuals receiving disability benefits on the basis of mental impairment. Foes said the rule cuts against both disability and Second Amendment rights, while backers said it is only common sense to keep guns away from the deranged.

Bob Goodlatte, R-Va., said the rule wrongly puts “the burden on individuals to prove that restoring their Second Amendment rights would not pose a danger to public safety” instead of on the government to prove the individual unfit to bear arms.

Mike Thompson, D-Calif., said: “These are people with a severe mental illness who can’t hold any kind of job or make any decisions about their affairs. So the law says very clearly that they shouldn’t have a firearm.”

A yes vote was to send HJ Res 40 to the Senate, where it was adopted and sent to President Trump for his expected signature. 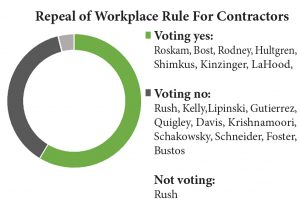 Repeal of Workplace Rule For Contractors: The House on Feb. 2 voted, 236 for and 187 against, to nullify a federal regulation aimed at keeping federal contractors in compliance with workplace laws such as the Fair Labor Standards Act, Americans With Disabilities Act, Civil Rights Act, Family and Medical Leave Act, Occupational Health and Safety Act and Age Discrimination in Employment Act. Under the rule, when companies bid for contracts worth at least $500,000, they must report any actual or alleged violations of 14 major workplace laws in the previous three years to government procurement officials, who would factor this information into decisions on whether to award contracts. A federal court ruling has temporarily kept the rule from taking effect.

The rule is designed to ensure that employees of federal contractors are not deprived of overtime pay, exposed to undue physical and health dangers, subjected to hiring or paycheck discrimination or denied other workplace protections guaranteed by law. But critics say that because the rule treats non-adjudicated claims against employers the same as it does proven wrongdoing, it denies “blacklisted” contractors their due-process rights.

Virginia Foxx, R-N.C., called it a denial of due process that “under this rule, bureaucrats can determine employers are guilty until proven innocent, and then deny them the ability to do business with the federal government.”

A yes vote was to send HJ Res 37 to the Senate, where it was adopted and sent to President Trump for his expected signature. 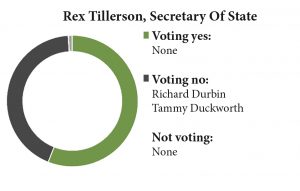 Rex Tillerson, Secretary of State: Voting 56 for and 43 against, the Senate on Feb. 1 confirmed Rex W. Tillerson, 64, as the 69th U.S. Secretary of State. Tillerson was employed by ExxonMobil for 41 years, serving as chairman between 2006-2016. Supporter said Tillerson’s international business experience will serve him well in America’s top diplomatic post. But critics questioned whether he would stand up to Vladimir Putin, given his close personal and business ties to the Russian president.

John Cornyn, R-Texas, said “not only is (Tillerson) a person of conviction and competence, he is also a man of character. He believes in putting this country first, and I have no doubt he will serve the United States with great integrity and care.”

Dianne Feinstein, D-Calif., said: “Russia has invaded Ukraine, annexed Crimea, intervened in Syria and meddled in our own elections, yet Mr. Tillerson refuses to offer support for international sanctions against Russia. He refuses to describe Russia’s bombing of Syrian hospitals and schools — and a U.N. humanitarian aid convoy — as war crimes.”

A yes vote was to confirm Tillerson as secretary of state. 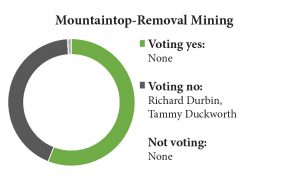 Mountaintop-Removal Mining: Voting 54 for and 45 against, the Senate on Feb. 2 joined the House (above) in adopting a measure (HJ Res 38) that would nullify a federal rule designed to protect streams, forests and drinking water in Appalachian states from pollution caused by debris when mountaintops are strip-mined for coal. Critics called this part of a “war on coal.” The rule has not yet taken effect. The nullification would occur under terms of the Congressional Review Act.

Majority Leader Mitch McConnell, R-Ky., called the rule “a blatant attack on coal miners” that would “cause major damage to communities and threaten coal jobs” in Kentucky and other states.

Maria Cantwell, D-Wash., said the best way to help miners is to “address their health and safety and their pension program. If you want to make natural gas more expensive, maybe you could make coal competitive again, but I don’t think that is what we really want in America.”

A yes vote was to send the resolution to President Trump for his expected signature. 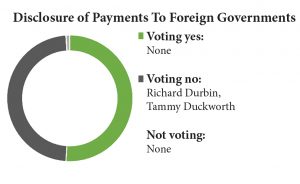 Disclosure of Payments to Foreign Governments: Voting 52 for and 47 against, the Senate on Feb. 3 joined the House (above) in adopting a measure (HJ Res 41) that would nullify a Securities and Exchange Commission (SEC) requirement that companies traded on U.S. stock exchanges publicly report payments to foreign governments for access to oil, natural gas, coal and other mineral resources. A byproduct of the Dodd-Frank law, the rule is designed to provide transparency to investors and serve as a hedge against corrupt actions by foreign leaders. But U.S. energy companies argue the rule gives an advantage to overseas competitors unburdened by such disclosures. The rule, which has not yet taken effect, would be killed under terms of the Congressional Review Act.

Sherrod Brown, D-Ohio, said the measure “really ought to be titled the Kleptocrat Relief Act” because it nullifies a rule that “protects U.S. citizens and investors from having millions of their dollars vanish into the pockets of corrupt foreign oligarchs.”

A yes vote was to send the measure to President Trump for his expected signature. 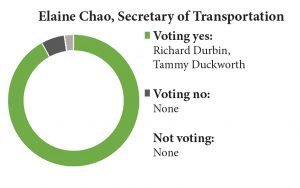 Elaine Chao, Secretary of Transportation: Voting 93 for and six against, the Senate on Jan. 31 confirmed Elaine L. Chao as the 18th U.S. secretary of transportation. Chao, 63, served in previous Republican administrations as secretary of labor, Peace Corps director and chair of the Federal Maritime Commission.

Chris Van Hollen, D-Md., said: “I appreciate Ms. Chao’s commitment during her hearing to enforce the Davis-Bacon Act’s requirement to pay fair wages to ensure that our nation’s construction jobs can sustain workers and their families.”

No senator spoke against Chao in brief floor debate on her nomination.

A yes vote was to confirm Chao as transportation secretary. 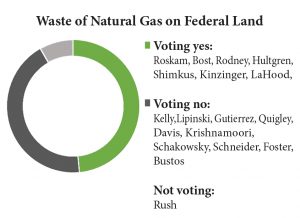 Waste Of Natural Gas On Federal Land: Voting 221 for and 191 against, the House on Feb. 3 adopted a measure that would nullify a new regulation aimed at reducing losses of natural gas — due to flaring, venting and equipment leaks — in oil and gas drilling operations on Bureau of Land Management and tribal lands in the West. This would be the first update of the BLM’s gas-wastage rule in 30 years, a period in which energy extraction technology has been greatly improved, as evidenced by today’s fracking boom. The BLM says gas wastage significantly reduces American energy production, deprives taxpayers and tribes of royalty payments and discharges high levels of the greenhouse gas methane into the atmosphere. But repeal backers say the rule places undue burdens on energy companies in a regulatory area best left to the Environmental Protection Agency.

Majority Leader Kevin McCarthy, R-Calif., said: “The oil and gas industry in America has already drastically reduced methane emissions even while increasing output, and the EPA already has the authority to regulate air emissions.”

Jared Polis, D-Colo., said: “It is a waste of taxpayer money, a misuse of our public lands to do anything other than to reduce our methane emissions.”

A yes vote was to send HJ Res 36 to the Senate, where it was adopted and sent to President Trump for his expected signature.