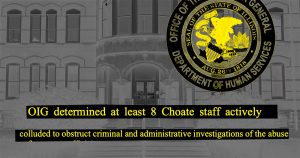 This article was produced for ProPublica’s Local Reporting Network in partnership with Lee Enterprises, along with Capitol News Illinois. Sign up for Dispatches to get stories like this one as soon as they are published.

The watchdog for the Illinois Department of Human Services is seeking harsher penalties against health care workers who obstruct abuse and neglect investigations.

Specifically, Neumer is asking legislators for a change in law that would allow his office to report workers engaged in similar misconduct to an existing statewide registry. The move could bar those employees from working in the health care field in Illinois.

The Health Care Worker Registry monitors direct care aides, nursing assistants and other non-licensed health care officials; its database of professionals includes those who are barred from working with vulnerable populations. They may have been barred because of criminal records or if they have been found in an administrative proceeding to have engaged in financial exploitation, what is known as “egregious neglect” or physical and sexual abuse.

Under the current system, state workers who help their colleagues by lying to or misleading investigators can face termination if they’re caught, but findings against them can’t be reported to the registry. So short of criminal charges, which are rare, nothing would prevent them from going to work in another health care setting.

The Office of the Inspector General “regularly sees instances where facility or agency staff seek to protect each other from the consequences of their misconduct by remaining silent about what they witnessed or lying to protect their fellow employees,” Neumer wrote in a recently released annual report on his office’s work.

In a follow-up interview, Neumer said expanding his office’s authority would help deter employees from “engaging in cover-up behavior or code-of-silence activity if they were aware that by doing so they risked losing their employment and possibly their ability to work in the health care industry in Illinois.”

For the earlier stories, reporters combed hundreds of pages of records, identifying more than four dozen cases between 2015 and 2021 in which the OIG cited Choate employees for providing false statements to the office’s investigators; for failing to make a timely report in accordance with the law; and for other failures to follow department policy concerning reporting and investigating abuse and neglect allegations. The few Choate workers charged with obstruction of justice or official misconduct for interfering with an investigation have had their charges dropped or reduced.

One case involved a mental health technician caught on a 911 audio recording threatening to break a patient’s finger. Though other voices could also be heard on the 911 call that was accidentally placed via a smartwatch, the other workers present refused to identify the perpetrator. The county prosecutor declined to bring charges related to the threats on the 911 call, citing insufficient evidence.

IDHS did not dispute any of the news organizations’ previously reported findings, saying in a statement at the time that the agency requires employees to cooperate with administrative investigations and trains them on the importance of giving law enforcement complete and truthful information. This week, a spokesperson said that although the inspector general works independently, IDHS has closely monitored the situation at Choate, worked with the inspector general and governor to implement reform, and “looks forward to reviewing and working collaboratively with lawmakers and the OIG on any legislative solutions.”

In his report, Neumer cited the inability to issue a finding to the registry in a particularly egregious 2014 abuse case at Choate that the news organizations had highlighted. In that case, at least 48 hours passed before anyone at the facility reported abuse to authorities, though numerous workers later told state police investigators that the patient’s injuries were some of the worst they’d ever seen. Throughout the state police investigation, multiple employees coordinated their stories and lied about what happened and who witnessed it, according to state police records.

Three of those employees were charged with felony obstruction of justice and each later pleaded guilty to a misdemeanor for failing to report the abuse to authorities. But those workers remained on the state payroll for nearly eight years. Others who knew about the abuse but didn’t report it faced no penalties.

This fall, the inspector general issued findings against eight employees it said engaged in the cover-up and recommended firing those who still worked at the facility. The employees were dismissed, but the law only allowed the inspector general to report one worker to the registry, the person whom his office found had committed the abuse. As a result, nothing bars the other seven from working in other health care settings.

Neumer told the news organizations that his proposal defines “material obstruction” as withholding or altering documentation or recorded evidence; improperly influencing, threatening or impeding witness testimony; giving untruthful information during an interview; failing to cooperate in an OIG investigation and lying to law enforcement. Employees would not be punished for exercising their lawful right against self-incrimination in a criminal case, he said.

Legislators in the Illinois House and Senate toured Choate last year in the wake of the news organizations’ reports, and they have held private meetings about issues where legislative solutions may be needed.

A spokesperson for House Speaker Emanuel “Chris” Welch said he was “incredibly troubled” by the reports on Choate and is “closely reviewing” the inspector general’s recommendations.

At an unrelated news conference in September, Gov. J.B. Pritzker said that he had no plans to close Choate but would consider doing so if the facility was unable to improve safety conditions for patients. His spokesperson did not respond to specific questions about whether he believed the facility had since taken adequate steps to improve conditions.

In a statement issued last week, the spokesperson said that the governor worked with leaders at IDHS to implement reforms, and that he “looks forward to reviewing and working collaboratively with lawmakers and the OIG on any legislative solutions.”