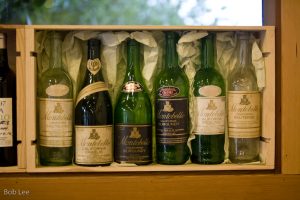 It’s illegal for out-of-state wine stores to ship to Illinois residents. The charge is a misdemeanor. A bill on the governor’s desk would up that to a Class 4 felony. (Photo by Bob Lee)

The National Association of Wine Retailers said Gov. Bruce Rauner should veto a bill that would make out-of-state wine stores and the Illinois residents to whom they ship felons.

“We think the law that’s on the books right now that bans out-of-state wine stores and retailers from shipping into Illinois is entirely unconstitutional.”

“The fact of the matter is Illinois is leaving upwards of $5 million or more on the table by not allowing out-of-state wine stores to get a permit and ship in and remit taxes to the state.”

“We know the governor is a wine lover,” Wark said. “He spends a lot of money on wine from Napa Valley, so we hope that he’ll take that into account, as well as his professed fondness of free trade. We’re hoping down the line we can do one of two things: either change the law or sue the State of Illinois,” Wark said.

Multiple attempts seeking comment from the Wine and Spirits Distributors of Illinois were not successful.

The governor’s office said the measure is under review.