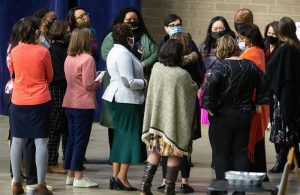 SPRINGFIELD – Democrats in the Illinois House of Representatives made history on Jan. 13 when they elected the first Black lawmaker to serve as House Speaker and ended the reign of Rep. Michael Madigan, the longest-serving statehouse speaker in the country.

But the decision to elect Rep. Emanuel “Chris” Welch, from Hillside, meant that members of the House Democratic caucus were ultimately unable to unite behind any of the three female lawmakers who came out as early contenders for the job.

Rep. Stephanie Kifowit, D-Oswego, was the first member of the Democratic caucus to announce her challenge to then-Speaker Madigan, issuing her intention to run to replace him on Oct. 1.

Reps. Ann Williams, D-Chicago, and Kathleen Willis, D-Addison, tossed their hats into the ring on Jan. 6, although Willis dropped out by Jan. 10 and threw her support behind Williams.

Kifowit, Williams and Willis were also part of a group of 19 House Democrats who, prior to the lame duck session that began Jan. 8, pledged they would not support Madigan’s re-election for speaker in the current General Assembly.

When Madigan announced he was suspending his campaign on Jan. 11, Welch and Rep. Jay Hoffman, D-Swansea, joined the field of candidates, but Welch was the only candidate to gain the support of 60 of his peers and pass the threshold needed to be elected speaker.

Kifowit said the growing list of candidates was a good thing in that it gave lawmakers a choice that many never had in their entire legislative careers.

“And I think that was my main goal, is that the people of the Illinois House, the Democrats, deserve to have a choice for their speakership. And it turned out that we had five individuals in total running, myself being the first, and now we have a new speaker,” Kifowit said in a phone interview.

Williams stressed the importance of party unity in backing Welch.

“My candidacy and that of the others really served as a catalyst for change,” Williams said. “One thing we could all agree on was that we want the House to function and function effectively. The caucus was very divided. Moving forward with a coalition really helped unify the caucus.”

Williams said she was optimistic that members of the Women’s Caucus “cracked the glass ceiling” by launching their candidacies and joining the coalitions that led to Welch’s selection as speaker.

“I think that one important thing to note is that women sometimes make it less about themselves and more about the collective. I think that’s a very powerful tool,” she said. 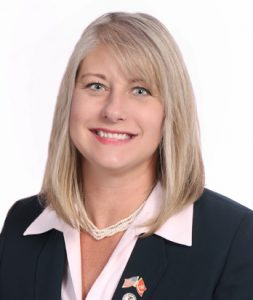 Kifowit criticized Madigan’s decision not to suspend his campaign earlier as part of the reason why she and other female candidates failed to garner enough support during informal balloting. She said the entire process of electing a new speaker for the 102nd General Assembly was “stifled by the continued presence of Michael Madigan in the conversation.”

“I’m not saying it wouldn’t end up with a Speaker Welch (if the process were different). I’m just saying that it would have given people the opportunity to discuss more, it would have maybe given an opportunity for more candidates to emerge, and definitely a more robust conversation,” she said.

In the hours preceding Welch’s ultimate approval as speaker, a striking image circulated social media platforms picturing Welch surrounded by Democratic women on the floor of the Bank of Springfield Center, which was the site of the House’s lame duck session.

According to Williams, Welch initiated that conversation with the House Democratic Women’s Caucus and whoever else wanted to join to address the concerns about his past treatment toward women.

That was in response to news reports released as support for Welch grew, outlining a nearly 20-year-old allegation that he attacked a woman in 2002, and two separate harassment and retaliation lawsuits that were voluntarily dismissed.

The 2002 police report from west suburban Hillside accused Welch of slamming an ex-girlfriend’s head into a kitchen countertop numerous times after she called him “a loser,” according to the Chicago Tribune. The woman did not press charges and the Tribune noted Welch denied the allegations at the time. After being elected speaker, Welch said during an interview that he has never hit a woman.

In a written statement, Welch said he has since reconciled with the individual involved in that incident.

“In fact, after our dispute we sought out the authorities ourselves. Their family lives in my district and are proud supporters of my public service and work,” he said in the statement.

Welch did not comment directly on the pair of lawsuits in a second statement issued by his spokesperson addressing the allegations from 2002.

“Out of respect for the individual involved, I will no longer comment on this false narrative. I have made a statement and I urge the public and the media to do their own ‘due diligence’ on the matter before jumping on an opposition bandwagon that does not reflect my true character. My colleagues selected me for this leadership position because they know my values and my record,” he said in the follow-up statement.

The Women’s Caucus nearly unanimously stood behind Welch despite the 11th hour reports of old allegations, with only Rep. Kelly Cassidy, D-Chicago, voting present on the nomination.

“I did so because, at the same time that we’re ending years of scandal over allegations of sexual harassment and corruption, we have also just been made aware of troubling allegations from Speaker Welch’s past,” Cassidy said in an official statement following the speaker vote on Jan.13.

Cassidy said in her statement that Welch has denied each allegation, but she would like to see them “vigorously reviewed.” She declined to comment further to Capitol News Illinois.

Kifowit and Williams both said that they and others engaged in several direct conversations with Welch concerning the allegations.

“Speaker Welch addressed the allegations and addressed them to several of us in private as well,” Kifowit said. “I respect Rep. Cassidy for calling for that inquiry and I will look to see what that entails as well. So, I’ll just let that run its course.”

Kifowit said she believes Welch understands the need for change and is incorporating some of the ideas of the Women’s Caucus in his leadership approach.

Williams said she believes Welch is “the right person for the right time” despite the past allegations.

“I understand how critical it is for women to be heard. I have been an advocate for women throughout my career, not just since the MeToo movement. I think it’s critical that as issues arise they are adjudicated, resolved legally. And in this case, I felt that that happened,” she said.

Last week, Welch released the roster for his leadership team, including seven women, five of them women of color. But none of the three women that challenged Madigan in the race for speaker made the list.

Kifowit said she didn’t ask for a leadership position, and has had good conversations with Welch about committee chair positions in the 102nd General Assembly.

“I am excited to work with Speaker Welch and his new leadership team for the betterment of Illinois. I know there is a lot of work that we all need to do and I have the utmost confidence in the speaker and his leadership team during these difficult times,” Kifowit said.

Williams also didn’t express any hard feelings over not earning a leadership spot. She said she’s excited about the diversity on Welch’s leadership team, and she will work to pass clean energy reforms with assistance from the new speaker – issues she has been working on for years.

“I believe that under his leadership, we will finally be able to push through the bottleneck and move forward with a comprehensive clean energy package,” she said. “This has been years in the making and it’s time.”

She said she will also continue to advocate for women in leadership at all levels of government.

“I believe Speaker Welch is committed to a collaborative and inclusive approach to our caucus, which I hope will ensure all voices are relevant and are heard,” she said. “That was one of my main goals in terms of pushing for new leadership of the House, and I think this is a real win for the caucus.”