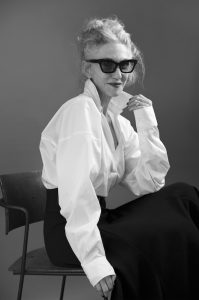 Linda Rodin is recognized as a style icon and skincare pioneer. (Photo by Stephanie Diani)

Runway fashion can seem so out of reach – and what’s a girl to do if she wants a cute Star Wars Stormtrooper tee that actually fits? These visionaries are taking center stage, putting style power in our hands.

Being a style icon to women half her age

Ask young fashion editors to name their idols, and a certain gray-haired, nearsighted, makeup-shunning 68-year-old makes everyone’s list: Linda Rodin, a former model, stylist and boutique owner who launched a successful skincare line when she was 59. She had been brewing and using her own oil for years, with glowing results. When her nephew suggested that her oil could become something more, she began sharing it with models and makeup artists at photo shoots.

Defining moment: When Linda was 18, she followed a boyfriend to Italy. While the romance didn’t last, “it changed my life,” she says. Her love for the country influenced her line of luxury face and hair oils, body creams, candles and perfume. In 2015, Rodin was acquired by Estee Lauder, and she continues her role as creative director for her brand.

Her new focus: Lipstick, which is the only makeup product she uses.

Success secret: “I never planned any of this. I followed my passions, which led me to where I am now. I think people appreciate that authentic journey.”

Doubling her sales by breaking the rules

The fashion industry is built on three core rules, but don’t expect Rebecca Minkoff to follow them. Rule 1: The industry is invitation-only, with a select group that deems you worthy of joining its ranks. Rebecca, who learned to sew in her high school’s costume department, crashed the scene at age 20 when Jenna Elfman, a family friend, wore her design on “The Tonight Show.”

Rule 2: Be aloof. “When we started on social media, our retail partners told us we’d “dirty ourselves,’” said Minkoff. But she built one of the most loyal fan bases in the business.

Rule 3: Always show clothing a season ahead. Last spring, Rebecca disrupted Fashion Week with her #seebuywear campaign, showing clothes that could be ordered online immediately. The gutsy move doubled sales. “When you go your own way,” said Minkoff, “you win.”

When actress and “Star Wars” fan Ashley Eckstein was cast in 2008 as the voice of Jedi Padawan Ahsoka Tano in the animated “Stars Wars: The Clone Wars,” it was a true pinch-me moment for her. But when she went to buy a “Star Wars” T-shirt, she discovered that sci-fi merch designed for women didn’t exist. So she made her own. In 2010, she partnered with a manufacturer, secured a license from Lucasfilm – being one of their actors helped her get her lightsaber in the door – and launched Her Universe to fill the clothing and jewelry needs of female fans everywhere. “‘Star Wars’ is a story of good overcoming evil, and you can’t put a gender on that,” said Eckstein.

The Force is clearly with her: She’s partnered with Kohl’s and Hot Topic, and grown her business into a multimillion-dollar venture.

Her superpower: “Optimism. My dad worked for Disney, so I was always taught to dream. Now I sell to Disney!”

Nothing quite prepares you for a career in fashion like being at war in Afghanistan. West Point grad Ashley Jung was an Army captain there in a unit that cleared roads of explosives. “I learned that failure is not an option,” she said. So when her sister Paige, also a West Point grad, said she wanted to go into fashion, Ashley told her she’d have her back. They borrowed $2,000 and launched Stella Valle, a jewelry line fusing masculine and feminine detailing. Armed with prototypes, they held home shows for a year and reinvested the profits in the company.

Pivot point: In May 2013, they cut a deal on “Shark Tank” to swap 35 percent equity in the company for $150,000. Next, the sisters launched Women Warriors, an affordable line infused with inspirational words – such as “Faith” engraved on a military-style dog tag. Today, Stella Valle is in 450 stores nationwide and on track to top $5 million in revenue this year. Mission accomplished.

Soften, smooth, firm and brighten skin while you sleep. This overnight treatment beat out the rest in our rigorous Lab tests – and proved it was worth every pretty penny!

Tester notes: Six reported how “smooth” the cream felt as it went on and made their faces feel. “It moisturized my skin into the morning,” one raved. “I woke up looking refreshed,” another said. Testers also gave it perfect marks for not being greasy or irritating. The botanical fragrance was a little polarizing.

Lab lowdown: The cream upped skin’s hydration levels 43 percent and was best at smoothing texture, according to Lab measurements.

The following products and vehicles were recalled by the Consumer Product Safety Commission and the National Highway Traffic Safety Administration. Unless otherwise indicated, discontinue use of the products immediately and return them to the store where purchased for a refund. For more information about the products, call the manufacturer or CPSC’s toll-free hotline, 800-638-2772. Only some cars or trucks recalled are affected. Contact a dealer for your model to see if it is included in the recall. The dealer will tell you what to do.

Whirlpool brand microwave hood combinations, sold at Best Buy, HH Gregg, Lowes, Sears and other home-improvement, home-appliance and retail stores and by homebuilders nationwide from January 2014 through April 2016 for between $370 and $470.

Internal arcing during use can ignite an internal plastic component, posing a fire hazard. Consumers should immediately stop using the recalled microwaves, unplug the units and contact Whirlpool for a free replacement product. Consumers can contact Whirlpool Corporation at 800-990-6254 from 8 a.m. to 8 p.m. ET Monday through Friday, or online at http://repair.whirlpoolcorp.com. Consumers also can visit www.whirlpool.com and click on “Product Recall” for more information.

The clockspring assembly may become contaminated with dust and cause the air-bag circuit to fail. Failure of the air-bag circuit may prevent the driver’s frontal air bag from deploying in the event of a crash, increasing the risk of injury. Chrysler will notify owners, and dealers will replace the clockspring, wheel back cover and column shroud for free. Remedy parts are expected to become available in November 2016. Owners were mailed interim notices on July 5, 2016. Owners will receive a second notice when remedy parts become available. Owners may contact Chrysler customer service at 800-853-1403. Chrysler’s number for this recall is S33.