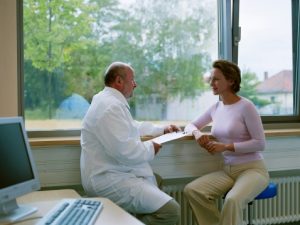 When a mammogram identifies a woman’s breasts as dense, it could mean she is at greater risk for developing breast cancer.

And a recent study from a physician at Advocate Lutheran General Hospital in Park Ridge, Ill., shows that a new procedure could join the mammogram in giving women and doctors additional information about increased breast cancer risks.

The study, co-authored by radiologist Dr. Nila H. Alsheik in collaboration with the Breast Cancer Surveillance Consortium, shows women whose breasts take in more dye when they get MRIs may be at much higher risk for cancer.

Most women are initially screened for breast cancer via x-ray mammograms, which can also identify women who have dense breasts and therefore have a higher likelihood of cancer. It can be harder to detect potential tumors in breasts that are dense.

However, the relatively new procedure of breast MRIs use a different imaging technique.

The extremely sensitive and specialized test uses a powerful magnet to capture images of the breasts. It is currently used primarily for women who have a genetic predisposition for or family history of breast cancer, and has a near-100% ability to detect cancers, but can deliver some false-positives due to sensitivity.

To perform the test, dyes that get absorbed through certain tissues, including tumors, are injected into the patient.

The new study looked at the mammograms of more than 4,200 women over a decade, controlling for women who also had dense breast tissue and other risk factors. The conclusion: women whose breasts absorb more of the dye are 2.7 times more likely to develop cancer during their lives, independent of other risk factors.

By comparison, women with dense breasts are between four and six times more likely to develop breast cancer.

Women who have both dense breasts and absorb more of the dye are at an even greater risk to get breast cancer. The takeaway: having both tests could provide an even more complete look at a woman’s breast cancer risk than a mammogram alone.

“There is increasing awareness regarding breast cancer risk factors and independent predictors of breast cancer risk, such as breast density,” Dr. Alsheik says. “These findings could suggest another valuable test and set of information for physicians and patients to consider when assessing likelihood of future breast cancer.”

Dr. Alsheik noted annual screening mammograms were still the backbone of detecting breast cancers, as they are the only imaging method proven to decrease mortality from breast cancers and are often the best way to catch breast cancers early. However, breast MRIs may also need to be viewed as an important adjunct screening.

“For so many cancers, one of the best ways to fight it is to catch it early,” Dr. Alsheik says. “This study’s findings can help ensure people who need more frequent or rigorous screenings get them.”

In 2019, Illinois became one of three dozen states across the country requiring disclosure of breast density in women’s mammograms, helping patients stay informed about their breast cancer risks and empowering them and their providers to make important choices regarding screenings. Shortly thereafter, federal legislation directed the U.S. Food and Drug Administration to establish a new national standard to alert women with dense breast tissue in their mammograms.