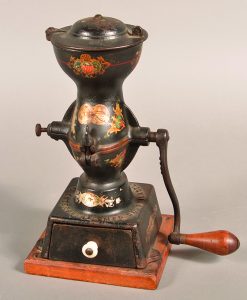 This strange looking cast-iron tool is a coffee grinder. Beans go in the top, the lid is put in place and the beans are ground and drop into the lower section mounted on a wooden base. (Kovels)

In the 1950s, there were still A&P grocery stores that only sold bags of coffee beans that had to be ground in a large iron grinder in the store, even though there were other brands of ground beans in bags. The customer chose the type and could grind it or ask a clerk to help. Some health food stores today still sell customers freshly ground coffee.

The Enterprise Manufacturing Company founded in Philadelphia in 1864 was one of the leading makers of both large store grinders and small iron grinders to be used at home. They also made juicers, Mrs. Potts sad irons, banks, tobacco cutters and other kitchen tools. The Enterprise store grinder made from 1886 to 1898 was 42 inches high and had two 25-inch-diameter wheels. It was a useful, expensive, status symbol for the grocery store. They were usually painted red or green with added decal decorations.

The 19th-century kitchen coffee grinder could be an iron grinder that emptied into a wooden box and made up to four servings or a wall-mounted grinder that could handle a pound of beans at a time. Collectors today like the cast-iron wall-mounted type with brass trim and a wooden drawer that caught the ground coffee. Most desirable for display if there is space is the large two-wheel grinder with an eagle finial and a cast iron stand.

Pictured is an Enterprise No. 1 cast iron coffee grinder in an unusual shape. It is 12 inches high, mounted on a wooden base. It sold several years ago at a Conestoga auction for $413.

Q: We have a Patent Magneto-Electric Machine for Nervous Diseases. It’s in a wooden box. We’d like to know the history and value of this machine.

A: The electromagnetic machine is a quack medical device popular in the late 1800s. The patient held a metal cylinder in each hand while the operator turned a crank to deliver a mild shock to the patient. The flow of electricity was regulated by the speed at which the crank was turned. Some claimed it could cure diabetes, heart disease, cancer, tuberculosis and other diseases. A Davis & Kidder’s Patent Magneto-Electric Machine for Nervous Diseases, patented in 1854, sold at auction for $360 in 2018.

TIP: Don’t drag heavy furniture. Get some slider disks ahead of time and be ready when they are needed. The disks are found at most hardware stores.

Learn the six collectibles NOT to collect anymore at www.kovels.com.