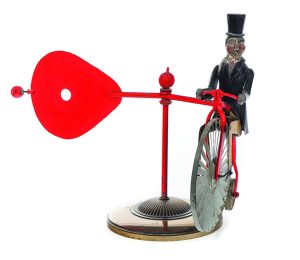 This folk-art whirligig shows President Theodore Roosevelt with his monocle and top hat riding a cycle while holding a red paddle that catches the wind and spins. It sold at auction for hundreds of dollars. (Kovels)

Whirligigs were invented centuries ago. They are both toys and tools, indicators of wind direction and the weather. Sources disagree on where the first were made; it was probably in China about 400 B.C. or by Native Americans about 550 B.C. The whirligig must have a spinning part and a base and many were made in fanciful shapes. The oldest known pictures of a whirligig were in tapestries made in medieval times.

There are many names and many shapes of whirligigs. Old sources call them pinwheels, gee-haws, whirlyjigs or whirlys. Vintage examples have waving arms, flags, angels’ wings, a man chopping wood, horses running and much more. They are also popular children’s toys or garden ornaments.

A political whirligig was sold by Garth’s Auctions in Ohio a few years ago. It is a figure of President Theodore Roosevelt with a top hat and monocle riding on a penny farthing cycle. Roosevelt served from 1901 to 1909, so it must have been made after 1901. He is holding a red counterbalance vane that turns the bike with the wind. The handmade whirligig sold at Garth’s for $865.

Q: I believe I have a pair of Apache wedding moccasins. Apache Indians killed my great-grandfather in Bisbee, Arizona, in 1885. He was the deputy sheriff. His gravestone reads, “Killed by Apache Indians.” I’d like to find the appropriate museum or collector that would be interested in them.

A: Indian moccasins can sell for several hundred dollars. Value depends on decoration, rarity and condition. Any information you have about the moccasins and how they were obtained adds provenance. Several museums, including some in Arizona, have collections of Native American items. Search the internet to find them. Those near the area where your great-grandfather lived might be interested in the connection to the local legend. If you want to sell the moccasins, look for an auction house that sells Indian items. They can give you an idea of their value and sell them for you. Be sure to ask what their commission and other charges are.