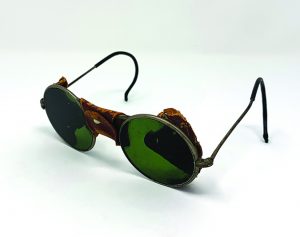 This is a very early pair of glasses with tinted lenses not used as sunglasses. (Kovels)

The earliest use of eyeglasses was recorded about 1300. Rock crystal was shaped and set into round frames to wear and improve clarity. Glasses with temple arms that sit on the ears were not created until the 1700s. Glasses with dark lenses were worn for medical reasons by the late 19th century. Sunglasses that just cut glare were not used until 1929.

President Theodore Roosevelt wore a monocle, probably the first president to admit he had trouble seeing. In 1784, Benjamin Franklin had special spectacles that had bifocal lenses. Benjamin Martin (1704-82) invented Martin’s Margins eyeglasses in the 18th century period. They were round, had thinner and more accurate lenses set in two round frames of iron or steel, trimmed with cattle horn or tortoiseshell and arms that wrap around the ears.

Next came “scissors spectacles” that could be folded to fit in a pocket. The side pieces looked like those on a pair of scissors. They were first used in the early 1800s. Once glasses could be made by machine, they became less expensive, less of an ornament, and more an item used by working men and women.

The glasses here are Windsors, a style started in Victorian times. This pair has leather side flaps, a leather nosepiece and a thin metal frame with round lenses and arms that wrap around the ears. There are many collectors of medical devices today, even auctions that feature only medicines, original containers and small medical tools. Prices are still low.

Q: I once owned a glass Alaska green celery dish by Northwood. I want to find a replacement and have no idea how. What can you tell me?

A: Northwood glass was made by the H. Northwood Co., founded in Wheeling, West Virginia, in 1901 by Harry Northwood. He and his brother, Carl, manufactured pressed and blown glass tableware and novelties. Harry Northwood died in 1919, and the company closed in 1925. The Alaska pattern was made between about 1897 and 1903 in several colors, including blue opalescent, emerald opalescent, green and Vaseline, a greenish-yellow glass. Some pieces are offered for sale in online shops. Try contacting a matching service like Replacements.com. Many dealers who sell early glass keep a “wanted” list to help customers. Let them know what you’re looking for and they will contact you if they find it. Your dish would retail for over $100.

TIP: Fabrics decorated with metal threads should not be washed. Wipe with a cotton swab and ammonia.

“A Diary: How to Sell, Settle and Profit from a Collector’s Estate” is a step-by-step 56-page guide on what to do when settling an estate — from gathering legal papers to dividing antiques among heirs and selling everything else, even the house. Available only from the Kovels for just $14.95, it also includes a free supplement. Order by phone at 800-303-1996; online at Kovels.com; or write to Kovels.com, P.O. Box 22192, Beachwood, OH 44122.