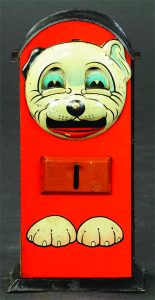 To deposit a coin in the Bonzo bank, you had to push his tummy. His tongue would come out of his mouth to deposit the coin inside. Many similar banks were made picturing other comic characters. (Photo by the Kovels)

This vintage bank is easy to date. It is a type of tin bank that is no longer popular, and the dog decorating the front was a comic cartoon star from the 1920s to the 1940s. This is the first famous Bonzo.

A live dog by that name became famous in the movies years later. Bonzo was first pictured in a British comic strip in 1922, but the bank was made in Germany by Saalheimer & Strauss. The company made toys, especially cars and motorcycles, until it was bought in 1936. The toys had an oval mark with two overlapping S letters on top of the word Success. There are two similar versions of the bank; a poem explaining how to deposit money is on the front of one type but not on the other.

Q: Is an embossed metal Cracker Jack button stud worth anything? It has Sailor Jack, little dog Bingo and “Me for Crackerjack” on the front. It’s about 1-inch high and 3/4-inch wide.

A: Frederick Rueckheim began selling popcorn in 1871. He and his brother, Louis, sold a mixture of popcorn, peanuts and molasses at the Chicago World’s Fair in 1893. Louis copyrighted the recipe and the slogan, “The more you eat, the more you want,” in 1896. Coupons for prizes were added to the boxes in 1910. Sales increased dramatically after small prizes for children were included in the boxes beginning in 1912. Frederick’s grandson was the model for Sailor Jack, which was first used in advertisements in 1916. The first boxes with Sailor Jack were produced in 1918.

Cracker Jack prizes are collectible, especially the old metal ones. Prizes were eliminated in 2016 and replaced by a game that can be played by scanning a URL code. A button stud like yours sold recently for $56. Cracker Jack is now part of Frito Lay.

TIP: Don’t store fabrics in plastic bags. Use a well-washed white pillowcase. Plastic holds moisture and the fabrics should breathe.

Learn about the record-setting prices scores of items have brought in recent years in the new Kovels’ Antiques & Collectibles Price Guide 2022. It’s the ONLY antiques price guide that empowers collectors with the most up-to-date price information based on actual sales and market data. Available in stores and online, it makes a great gift.