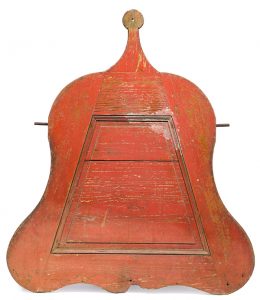 Can you guess what this unfamiliar antique was used for? It is 40 inches high and 35 inches wide and probably made of Southern Yellow Pine.

It is called a “punkah.” It was made in the early 19th century and used with the help of a man called a “punkah wallah” who pulled a cord to make the punkah swing back and forth like a fan. It was the “air conditioner” used in hot climates, not just in America.

The wooden punkah was suspended from the ceiling with wrought iron pins at the lower portion of each shoulder. It also has a round finial with a hole that helps with the balance.

Q: “Scooby-Doo” cartoons were among my favorites when I was young. I still have an orange 1973 metal lunchbox with Shaggy and Scooby-Doo running away from a headless horseman. It still has the thermos. Is it rare?

A: “Scooby-Doo, Where Are You!” is a children’s cartoon that debuted on the Saturday-morning cartoon lineup in 1969. The series had teenagers Fred Jones, Daphne Blake, Velma Dinkley and Shaggy Rogers and the talking Great Dane, Scooby-Doo. They solved mysteries and drove around in the Mystery Machine. The 1973 lunchbox is considered rare and, if in good condition, could sell for $300 or more.

Q: We had a painter at our house who knocked over my grandmother’s old curio cabinet and most everything inside it broke. Our painter wants to reimburse us for everything damaged, but I don’t know the price of all the old glass he broke. All the pieces were very old.

A: It’s impossible to estimate the value of the broken glassware without knowing what type it was, which pieces and how many pieces were broken. We’ll assume it wasn’t Depression glass, which was made during the 1920s and early 1930s. Those might sell for as low as $6 a glass. Pressed glass was made beginning in the 1820s and was popular until about 1900. Pressed glass pieces could be worth a few hundred dollars each. Take some pieces to an antiques dealer or auctioneer and ask for a suggestion of value.

TIP: Do not store jewelry in a pile. Stones will scratch the metal on other pieces and diamonds can scratch other gemstones. Use a jewelry box with compartments.

Subscribe to the Kovels’ free weekly email newsletter at www.Kovels.com.

ANTIQUES AND COLLECTING: Trial vase pieces can have modest value at auction