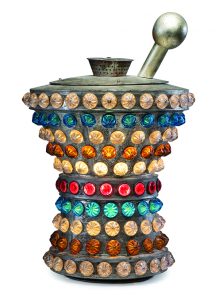 This 1920s apothecary sign shaped like a mortar and pestle is 20-inches high, made of tin with cut and colored glass mounted to the outside, and sold at Cowan’s for $8,125. (Kovels.com)

Large signs with flashing lights and moving graphics and ads that identify a store by brand or content are important. But there were no electric signs before Edison invented the light bulb, so what did they use?

The cigar store sign — a life-size, carved wooden Indian often holding tobacco leaves — is recognized even today. But what could serve as a trademark for a drug store or medical shop? Some 19th-century stores used a large glass jar in a special shape known as an apothecary jar. The jar was sometimes filled with colored water. By the 1920s, many shops used a large sign shaped like a mortar and pestle.

Pharmacies still use pictures of mortars for signs. A Cowan auction sold an elaborate sign shaped like a mortar with a pestle handle sticking up from the inside. The sign was covered with colored cut glass that lit up on the outside. The 1920s sign was estimated at $1,000 to $2,000 and sold for $8,125.

Q: I found an odd, old nail that’s about 2 1/2 inches long and has a flat round head that’s about 3/4 inch wide. There are two numbers stamped on the top. Can you tell me what this was used for?

A: You have a date nail. They were primarily used by railroads on treated railroad ties to indicate the year the tie was treated or the year it was laid. Most were made of steel, but some were made of iron or copper. Different shaped heads or letters were sometimes used to indicate the type of timber, whether it was new or used or something other than the date. Date nails were first used in France in 1859 and in the U.S. beginning in 1897. Use of date nails declined during World War II, and almost no railroads have used them since 1970. You might be able to find the name or identifying mark of the nail manufacturer on the shank of your nail. A collection of railroad tie date nails from 1907 to 1940 sold for $36 at a recent auction of railroad memorabilia.

TIP: If the drawer in a cabinet sticks, buy some silicone spray. Spray only the runners and the sides of the drawer. Do not let any spray get on the front finish of the cabinet.

Looking to declutter, downsize or settle an estate? Kovels’ Antiques & Collectibles Price Guide 2022 by Terry and Kim Kovel has the resources you’re looking for.