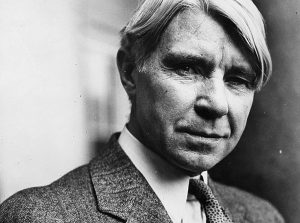 Carl Sandburg’s lasting legacy shines on in the written word and not even COVID-19 can dim the luster.

The Galesburg native wrote poetry and prose, was a newspaper reporter in Chicago, lectured and performed around the country, and produced a Pulitzer Prize-winning biography of Abraham Lincoln.

“Poet and performer, biographer and lecturer, salesman and singer, political activist and freewheeling newspaperman, Sandburg seemed to be everywhere and do everything, creating a personal narrative that captured the public imagination and made him a natural media figure,” wrote Danny Heitman in a 2013 piece for the National Endowment for the Humanities.

The life and times of Sandburg (1878-1967) continues to be celebrated — although in more limited fashion in these times of pandemic — in the western Illinois town where he was born, raised and continued to visit even after moving away.

COVID-19 forced cancellation of many Sandburg-related events this year, including April’s annual Carl Sandburg Days Festival and a series of programs and monthly concerts.

After a four-month shutdown, the museum is back in business with limited hours — open to the public from 1-5 p.m. Thursdays, Fridays and Sundays and 10 a.m.-5 p.m. on Saturday. 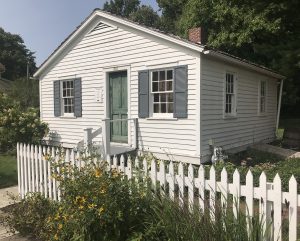 A modest three-room cottage surrounded by a white picket fence is the birthplace and boyhood home of Carl Sandburg in Galesburg. (Photo by Jack McCarthy / Chronicle Media)

Galesburg, the Knox County seat and home to more than 32,000, is about a three-hour drive from Chicago, 2 1/2 hours from Rockford, an hour from the Quad Cities and less than an hour from Peoria.

Galesburg is also home to Knox College, site of one of the famed series of debates between Abraham Lincoln and Stephen A. Douglas as both campaigned in 1858 for a U.S. Senate seat. Across the street is a stately Knox County courthouse, built around 1840.

The community also is home to a rail museum and annual June Railroad Days festival that was canceled this year due to COVID-19.

But Sandburg is arguably the main draw as visitors who come from around the country and world navigate a twisting route through the town to arrive at a modest residential neighborhood.

The property includes his birthplace and first home, a white clapboard three-room cottage. There’s also a visitor’s center with museum and scores of artifacts, plus a shop and small theatre.

An adjacent garden features a walkway with Sandburg quotations engraved in stone along with the final resting place of Sandburg and his wife, Lillian Steichen.

A downloadable brochure offers a driving tour of nearby notable Sandburg sites, including three other family homes.

The son of Swedish immigrants, Sandburg quit school at age 13 and embarked on a series of jobs delivering milk, harvesting ice, shining shoes and threshing wheat. He was later a traveling salesman, social organizer and served in the Army during the Spanish-American War.

Sandburg began publishing major works of poetry in 1916 and joined the Chicago Daily News as a reporter in 1917 covering a wide variety of subjects, including Chicago’s 1919 race riots. He later worked as a film reviewer. 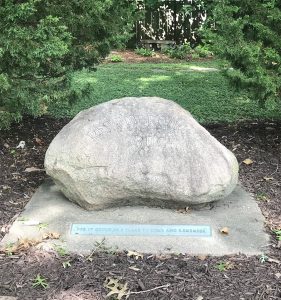 Remembrance Rock, located in the middle of a garden, marks the final resting place for the ashes of Carl Sandburg and his wife, Lillian. (Photo by Jack McCarthy / Chronicle Media)

His acclaimed series of Lincoln biographies began appearing in the 1920s.

“(He was) the one American writer who distinguished himself in five fields — poetry, history, biography, fiction, and music,” said friend and biographer Harry Golden, in a Poetry Foundation profile.

One of his most famous works, his 1914 work in Poetry magazine titled “Chicago” remains a perfect capture of time and place:

“Hog Butcher for the World

Player with Railroads and the Nation’s

City of the Big Shoulders.”

Sandburg spent the last 22 years of his life in Flat Rock, N.C. That property is also a historic site managed by the National Park Service. It opened in 1974.

“Sandburg seemed to have his finger on the American pulse,” said President Lyndon B. Johnson at a 1967 memorial service at the Lincoln Memorial in Washington D.C. “He seemed able to give voice to the whole range of America’s hopes and America’s hates. He seemed able to communicate, above all, the restless energy that has vitalized, stimulated, and, on occasion, degraded the history of our Nation …

I will miss him; we will all miss him. There will not be one like him again.”

www.poetryfoundation.org/poets/carl-sandburg (Poetry Foundation’s Sandburg biography and links to poems and other works)