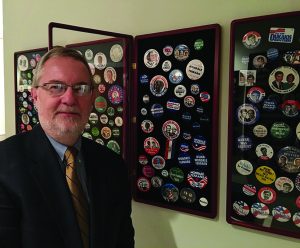 Remember who ran for president and vice president against Ronald Reagan and George H.W. Bush in 1984? Sitting around our dinner table, it took a while for my kids to answer. In fact, they were stumped. (Thank you, Siri and Google.) Answer: Walter Mondale with Geraldine Ferraro.

How quickly we forget those who ran the high-profile race for the White House but didn’t make it.

My friend Dr. David Parkyn, president of North Park University in Chicago, invites guests to peruse a hallway gallery in his home, filled with framed campaign buttons going back a half a century of candidates who won their party’s endorsement, but went on to lose the campaign.

My visit to his captivating bipartisan collection made me realize how important it is to talk to kids about winning and losing. With this election season coming to a close, it’s an opportune time to have a conversation about trying and losing, for there will be more people who lose their bids for elected office than win at the ballot box. Understanding that losing isn’t the end-all is an important life lesson.

Here are five ideas on how to relate with kids about winning, losing and perseverance.