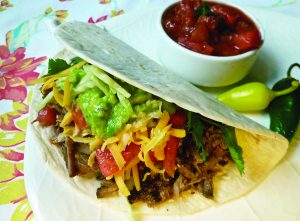 It’s finally time to share my family’s favorite “Too Good to Be True Slow-Cooker Beef Tacos” recipe. Passed on by word of mouth from one neighbor to the other, it’s a recipe that’s so easy to remember that I’ve just never taken the time to write it down.

Simply put: “Place pot roast sprinkled with taco seasoning in a slow cooker. Set on high and cook five to six hours. Spoon tender, shredded beef into warm soft taco shells and add favorite fillings.” That’s it! No-fail, no-fuss cooking that our busy lifestyles demand when we want to gather friends together for a robust and tasty evening meal.

TIP: For a spicy pot-roast dinner, follow above steps. After three and a half hours in the slow cooker, add six peeled and quartered potatoes and six medium carrots, halved crosswise and lengthwise, on top of the meat. Add pepper and 1/4 teaspoon salt. When meat and vegetables are tender, about two hours later, remove meat and vegetables with a slotted spoon and place on a serving platter. Spoon drippings over meat, and serve with a fresh green salad. Serves 6.