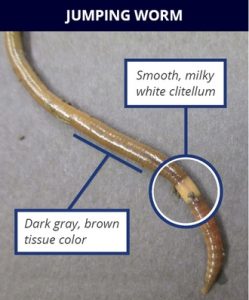 Jumping worms are larger than other earthworms, about 4 to 8 inches long, with glossy skin and a more rigid, stiff structure. They thrash when touched or disturbed, giving them their unique nicknames. (University of Illinois Extension photo)

After a long winter, Illinois gardeners are eager for the new growing season. While doing the usual preparations and tasks, home gardeners should be aware of an invasive species wriggling across the Midwest — the jumping worm.

Jumping worms are non-native earthworms that can be easily spread by humans, but there are steps gardeners can take to reduce risks. Also known as Alabama jumpers, crazy worms, or snake worms, this invasive species is named for its unique, active movements. First discovered in Illinois in 2015, the pest now has been confirmed in 23 counties across the state

“In the past, we’d hear from gardeners concerned with spreading or bringing home fungal or viral diseases, but now the top concern is jumping worms,” says Richard Hentschel, a horticulture educator with University of Illinois Extension.

Jumping worms often are found in the leaf litter or mulch layer, or in the top 3 to 4 inches of soil in wooded areas, garden beds, and lawns. Once established, jumping worms can damage plant roots, lawns, or ornamental gardens.

“As the worms feed, they alter the soil by increasing aggregate size, creating larger clumps with more space in between,” Evans says. “This is caused by their castings making up a higher and higher percentage of the soil.”

Over time, the soil begins to look like coffee grounds. Since this sign is delayed and the worm’s microscopic eggs can survive Illinois winters, gardeners may unknowingly have them or spread them.

While the worms have a huge impact on the fragile forest soil profile of Illinois forests, effects to the garden or yard can be addressed.

“This is not a ‘sound the alarm and panic’ situation, but it is one to keep an eye out for and know about,” Evans says. “Jumping worms do not disperse very fast on their own. It is human-aided spread that can be an issue.”

Gardeners can help by using heat-treated commercial compost or mulch; cleaning off equipment and shoes, especially if working at multiple garden sites; and not sharing home compost, mulch, or plants.

“Dividing perennial plants is a good gardening practice,” says Hentschel. “However, sharing those perennials with neighbors or donating them to plant sales may not be the best thing to do now.”

Before transplanting in the same yard, Evans suggests gardeners remove soil and wash plant roots to prevent spreading eggs. It is still safe to purchase plants from garden centers or catalogs or those that are started from seed and grown in pots, he says.

Adult worms can be removed when found, usually from June to the first freeze. Jumping worms are larger than other earthworms, about 4 to 8 inches long, with glossy skin and a more rigid, stiff structure. They thrash when touched or disturbed, giving them their unique nicknames. Residents may see them on pavement and sidewalks after a heavy rain with other worm species.

The main identifying feature is the clitellum, or band, which is smooth, not raised, and completely circles the body. Often it is a milky white color starting at the 14th segment, earlier than other species. The public can submit a photo of a worm for identification to their local Extension office, which can be found at go.illinois.edu/ExtensionOffice.

“If you have jumping worms, these mitigation efforts are needed, along with fertilization and mulching to maintain organic matter for plant health,” says Evans. “Realistically, it is going to be hard to get rid of an active population until research provides better practices to manage them.” 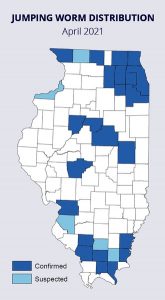 Learn more about how to identify and report jumping worms using a fact sheet found at go.illinois.edu/JumpingWorms2021. (University of Illinois graphic)

This does not mean gardeners need to abandon their yard projects or find a new hobby. Hentschel says they should continue to grow, divide, and enjoy the many wonderful blooms and harvests throughout the season.

“Just keep an extra eye out for jumping worms, and stay safe by keeping your plants, mulch, and compost in your own yard.”

Hentschel and Evans both say there are likely more counties with the pest that have not been officially confirmed. Learn more about how to identify and report jumping worms using a fact sheet found at go.illinois.edu/JumpingWorms2021.