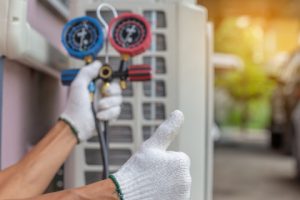 Energy experts encourage homeowners to conduct an energy audit to see if they can save on home cooling costs. (Photo courtesy of University of Illinois Extension)

As the temperatures soar, there are simple ways to save money on energy bills this summer.

According to the Department of Energy, a typical home uses 48 percent of energy expenditures just on the heating, ventilation, and air conditioning system. “Although a lion’s share of that percentage goes to heating homes, Americans still spend $29 billion every year to power their air conditioners,” says Erin Hollinshead, executive director of Safe Electricity.

Aside from replacing central air conditioners with a newer, higher-efficiency model, there are some things one can do to increase efficiency during the hottest part of the year, which can help reduce energy bills.

“Cooling your home efficiently this summer does not have to be difficult,” says Hollinshead. “Major projects will boost your home’s efficiency, but simple behaviors are also important in increasing efficiency and are not to be overlooked. By preparing your home, you can save money, stay comfortable, and decrease demands on the electrical system.”

Safe Electricity provides the following tips to save money on cooling costs:

Increased summer electric demand not only affects the monthly budget, but it can also seriously strain your home’s electrical system, which may create dangerous shock and fire hazards.

Flickering or dimming lights or frequent circuit breaker trips are signs of an overloaded electrical system or faulty wiring that should be checked immediately by a qualified electrician, Hollinshead says.